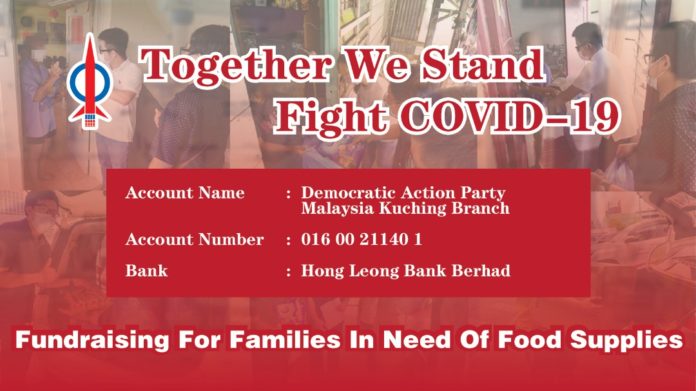 The DAP Bandar Kuching and Stampin Service Centre have since 30-3-2020 till 3-4-2020, submitted the names and contacts of more than 3000 families who need supply and delivery of essential food items to the State Welfare Department.

On 1-4-2020, I have even personally met up with the Deputy Chief Minister, YB Douglas Uggah seeking his help for urgent action to be taken on this matter.

As at today (5-4-2020) at 1:00 p.m., we have checked with the applicants whose names we submitted on Monday, Tuesday and Wednesday. More than 95% of those we asked have not received any essential food items. The other 5% received some food assistance from church groups, NGOs or some from our DAP members as personal donations.

If one were to take an average of 5 persons in one household, 444,329 households would have involved 2.22 million persons. Sarawak only has a population of 3.2 million. That means 2 out 3 persons will have received some food aid from the state as stated by Fatimah. But that is not the case on the ground. At least, the 3000 plus households applying through the 2 DAP Service Centres did not receive anything from the State Food Aid from the State Welfare Department.

Did Fatimah over-state the figure or was it discrimination and persecution of those who have approached DAP service centres to ask for help?

As such, we will have to source for fund and essential food items to give out to those applicants and apply for police permits to allow our members and volunteers to deliver the food items.

Those who wish to donate to the fund for the purchase of food items for delivery may do so via the following bank account:
Account Name : Democratic Action Party Malaysia Kuching Branch
Account Number : 016 00 21140 1
Bank : Hong Leong Bank Berhad

We will start our delivery of the essential food to those applicants on Tuesday.