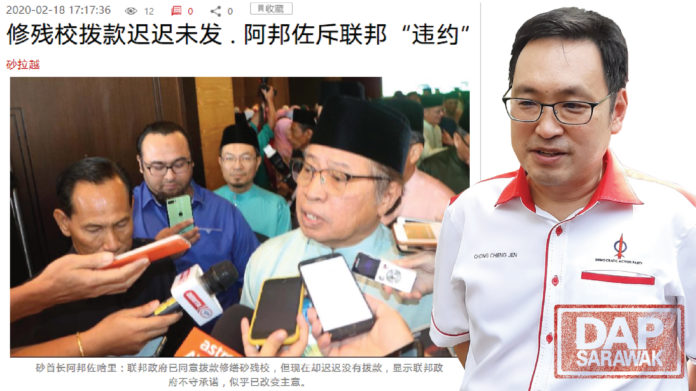 Abang Jo should be asking Jabatan Kerja Raya (JKR) Sarawak on the progress or delay in the implementation of the repair of dilapidated schools in Sarawak instead of making baseless accusations against the Pakatan Harapan Government.

The dilapidated school’s repair projects from the RM350 million allocation were right from the beginning manages by the State JKR and the 37 schools to be repaired were also chosen by the State Government.

On 4-8-2019, Abang Jo announced that Sarawak State Government has re-paid its debt to the Federal Government in the sum of RM350 million.

A day after, on 5-8-2019, the Ministry of Finance (MOF) issued a letter authorizing the Ministry of Education (MOE) to carry out the preparatory work on the implementation of repair of the dilapidated schools’ projects in Sarawak. The letter was issued out of trust based on the press statement made by Abang Jo despite the fact that the transfer of funds has not been confirmed.  It was done with the purpose solely to expedite the implementation.

On 6-8-2019, the MOE issued a letter informing the Ministry of Works to go ahead with the preparation for the implementation of the repair of dilapidated schools projects in Sarawak.

On 14-8-2019, after confirmation of the receipt of the RM350 million payment, the MOF issued a second letter to the MOE informing the latter that the fund had been received and thus requesting the MOE to take all action for the urgent implementation of the repair of the dilapidated schools’ projects.

On 15-8-2019, the MOE issued the Surat Kuasa Pelaksanaan Projek (SKPP) to the Director-General for Works and the Sarawak JKR to proceed with the implementation of the repair of dilapidated school projects.

A quick check with the JKR Sarawak yesterday on the repair projects of the 37 dilapidated schools reveals that:

4.​ 16 school projects, the value and scope of which will be reviewed by JKR Sarawak and Jabatan Pendidikan Negeri Sarawak and tender will be called in March 2020.  Awards of the tenders expected to be in May 2020 and work expected to be completed in November 2021.  The review of the value and scope of the 16 school projects was necessary because the State Government has attached too high costs in respect of the repair of those 16 schools.

As the Chief Minister of Sarawak, Abang Jo surely has access to all this information and in fact, Abang Jo is in control of the JKR Sarawak which is under the State Government.  Why had he not sought verification with JKR Sarawak before making such a baseless and sweeping statement? Is it out of sheer ignorance or ill intent?

Looking at the progress of these 37 school repair projects, I do not think that the State JKR is delaying the projects to sabotage federal-funded projects.

On the other hand, as the head of the State Government, Abang Jo should be more honorable, to tell the truth, and not shooting blindly like an immature politician (worst still shooting his own feet along the way).