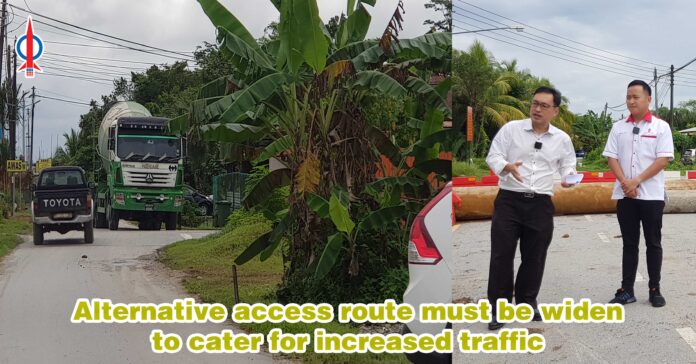 Before JKR designates a housing estate lane to be the alternative route during government construction period, JKR and MBKS should ensure that the lane be properly widen to cater for the increased traffic flow.

There is currently a project for the construction of a bridge connecting the Stutong Resettlement Scheme to Sg Tapang and Samarahan. In fact, the fund for the project was initially approved during Pakatan Harapan’s time, but the implementation of the project was delayed till last year.

For the construction project, JKR has closed Lorong 28 of the Stutong Resettlement Scheme and designates Lorong 24 as the alternative access road for 2 years, the estimated time for the completion of the bridge project.

I have received complaints from the residents around Lorong 24 to 28 of Stampin Resettlement Scheme that Lorong 24 is too narrow.

As it is now the designated access road, there is now constant flow of large lorris and cement trucks along Lorong 24.

This has not only caused great inconvenience to the residents nearby but also poses danger to them.

Today, my assistant Michael Kong and I went to verify the complaint and inspect Lorong 24. It is indeed too narrow for lorries and trucks.

We urge JKR and MBKS to take immediate action and work together to resolve the issue.

As a general policy, JKR and MBKS should ensure that the alternate access road for any government construction project must be wide enough and safety measures implemented, this is especially so, if the designated access road is in a housing estate.