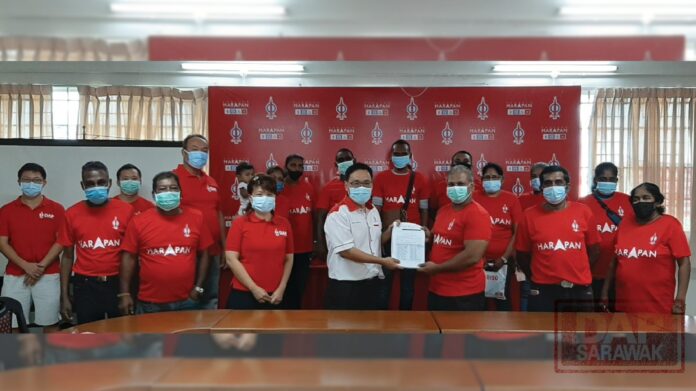 The DAP is still regarded as the best protector of the country’s wealth and Rakyat’s money.

Today, we witness the submission of more than 100 new membership applications from the residents from the Batu Lintang state constituency, comprising mostly the Indian community to the DAP Sarawak, applying to form the DAP Stapok Branch.

In the last few months of the “Sheraton Move”, many political parties and their leaders have made DAP the bogeyman to justify their traitorous act of betraying the mandate of the people. UMNO and PAS labelled DAP as anti-Malay. Some Bersatu leaders sang along. The GPS would rather work with PAS than with DAP.

Notwithstanding all such slanderous remarks, the ordinary Rakyat still regards the DAP as the party of integrity and principles and see DAP as the best safeguard to protect the Rakyat’s tax-payer money.

With DAP as a partner in government, many of those with corrupt intent to abuse their government positions for personal gains did not and will not get their way.

It is widely known in the Pakatan Harapan administration that the MOF under Lim Guan Eng has insisted on open tenders as the SOP for most government procurement process.

Many requests for exemption from open tender process for certain projects and procurements have been turned down. Exemptions were granted only in very rare occasions with strong justification.

That is why, as the Finance Minister, Lim Guan Eng was not popular even amongst some of his colleagues in the cabinet. But we owed it to the people to ensure that their tax-payer money is not squandered and plundered.

It is the duty of the Finance Minister and also the fundamental principle of DAP that public fund must be spent prudently and that tax-payers must get their money’s worth for every cent spent by the Government. So long as we hold firm to this principle in governing, there will be very little room for corruption and self-enrichment for politicians.

Now that the UMNO PAS have taken over the federal government, all the safeguards set up by the PH Government to ensure good governance is slowly being removed. The likes of 1MDB may re-emerge and we will hear more of “RM2 million is just my pocket money” coming from ministers.

Notwithstanding the huge disappointment on the fall of the PH Government, DAP will not lose hope and will continue to fight on for the betterment of the country and Sarawak.

To the new members, my advice is that to be a member of DAP is an obligation to the country and the Rakyat. We must continue the struggle with integrity and discipline.