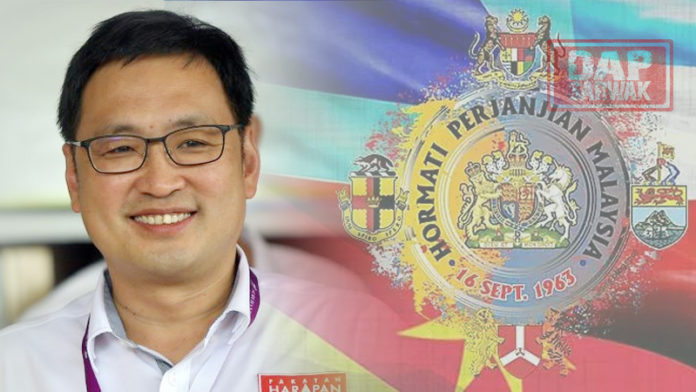 Abang Jo should not be blaming the secretariat but his own GPS Members of Parliament for the non-passing of the Constitution Amendment of Article 1(2).

The Amendment Bill tabled by Tun Mahathir on 9-4-2019 reads as follows:

“1(2)  The States of the Federation shall be

Isn’t that what the GPS has always been demanding, “no more no less”, but when it comes to crunch time, they abstain.  If there were something wrong with the Amendment Bill, why are they not voting against it?  Abstaining is the most irresponsible thing to do especially when one is dealing with voting in Parliament.

THE MINISTER’S SECRETARIAT HAS DONE NO WRONG.  THE FAULT LIES WITH THE SELF-SERVING POLITICAL INTEREST AND THE BIG EGOS OF GPS.

That, is political interest above Sarawak’s interest.

SECONDLY, it has become a norm for GPS to never accept anything from the opposite side of the political divide even if the latter’s proposals are good and beneficial to the people.

There have been too many incidents in DUN Sarawak when the Opposition ADUNs tabled certain motions which were good and beneficial to the people of Sarawak.  Knowing that it couldn’t reject such motions, the GPS ADUNs would then copycat the motion, amended some words to the motion and then tabled it.  The speaker will then decide based on voting which of the 2 motions was to be debated.  With the GPS’ absolute majority in DUN, it goes without saying that the GPS ADUN’s motion would always be debated and accepted while the Opposition’s motion would be rejected.

This is very immature political child-play by the GPS.  They had the numbers in DUN and the Speaker.  Thus, they got their way all the time in DUN Sarawak.

But such was not the outcome when the GPS repeated its childish stunt in Parliament.  Even when the Bill tabled by PH Government is word for word same as the 1963 version of the Constitution, no more no less, the GPS tried to add in additional terms as a condition for supporting the Bill.  This was done so that they can repeat what was done in DUN Sarawak, ie. claiming credit for the amendment.

Sad for the GPS, they should have known better, Parliament and national politics is no place for such child play.

Along with it, the GPS has squandered the golden opportunity for Sarawak to regain its original status in MA63 in Malaysia.  Now, because of the doing of the GPS MPs in abstaining from voting, Sarawak remains 1 of the 13 states in Malaysia.

Not only has the GPS shot their own legs by not voting for the Amendment Bill, but they have also shot the legs of Sarawakians and also Sabahans.