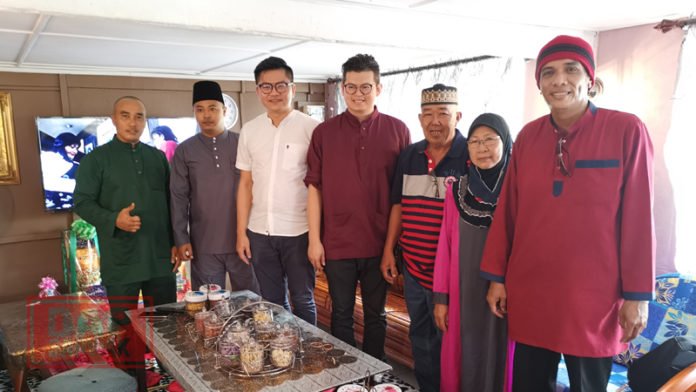 Today, we were on the ground together with YB Wong King Wei to do some house to house Raya Visitation at Kampung Sekama Utara, a Malay Kampung located in the heart of the city of Kuching to share some festive Raya cheers and extend Hari Raya greetings to the residents of the kampung as well as to build stronger bonds and relationship with them especially during this festive season.

Festive celebrations such as Gawai or Raya can unite the people, as such occasions see people of different races and religions visiting one another, celebrating together, and even building bonds of friendship and understanding with one another. Given this, such practices should be encouraged further during every festive season.

Today is also Duan Wu or Zongzi Festival for the Chinese. While these are different celebrations and cultures, but if we look closer, there are often similarities in our culture that can bring us all together.

To the Malay’s, they often celebrate Hari Raya by enjoying rice wrapped in young palm leaves known as Ketupat and for the Chinese who also celebrates today’s festival with rice dumplings, but instead it is wrapped with bamboo leaves.

In our cultures and traditions, we can always find similarities and that can help bring our cultures together and forge stronger bonds among one another as we appreciate the similarities in our diversities even more. We also took the opportunity to listen to the concerns and complaints of the residents here in the Kampung.

For the past 2 days, it has been raining heavily especially in the afternoons and this has given rise to serious concerns by the residents of the rising water levels in their area and also flash floods occurring. It was only in 2015 that a big flood hit the area and the flood waters were waist deep in some of the houses causing damages to the furniture and appliances in the house.

We will continue to give feedback to the local council on the drainage issues that they are facing as well as follow up with the relevant authorities including DID in terms of more long term plans for flood mitigation projects and drainage that will address this issue on a long term.