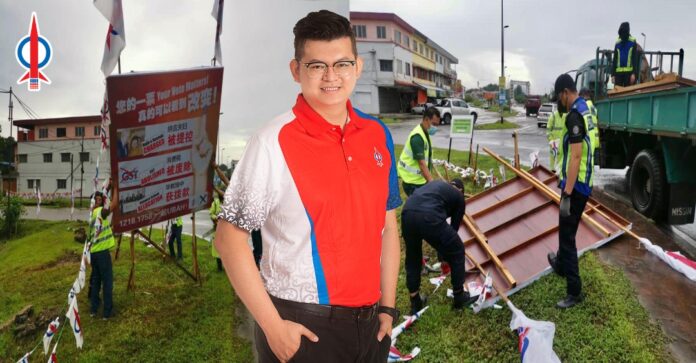 Yesterday, our campaign billboard was torn down, supposedly because the message on it was deemed as an electoral offence.

But the billboard simply portrays how voters’ decision to vote Harapan in GE14 have brought a new change for Sarawak and Malaysia. We achieved the unthinkable. Firstly, Najib Razak and Rosmah Mansor were charged for corruption. Secondly, the abolishment of GST had lightened the people’s burden. Thirdly, fairer distribution to Chinese schools. Essentially, our message was – people’s votes mattered!

Yet such empowering message did not go down well with the 10-men strong SPR enforcement team and their bosses. They arrived at Highfields, Batu Kawah around 2pm today, and explained to me that the billboard is promoting feelings of ill-will or hostility as stipulated under Section 4A of Election Offence Act. Even after many of our attempts to convince them, the enforcers were still adamant –they cut down our billboard with a chainsaw.

I then stood next to the remnants feeling frustrated yet inspired. While the powers that be might have succeeded in “erasing” our message from the billboard, such heavy-handed tactics will never wipe them out from the rakyat’s minds. Through the power of the ballot box, eventually, we have seen one of the world’s biggest kleptocrat get convicted in a court of law. Such a feat would not have been possible without throngs of Sarawakians going out to vote.

We have done it once; we can do it again. Let go out and vote on 18 Dec. Each of your vote matters in ensuring good governance and better accountability so that the benefit of development can reach the many people of Sarawak.