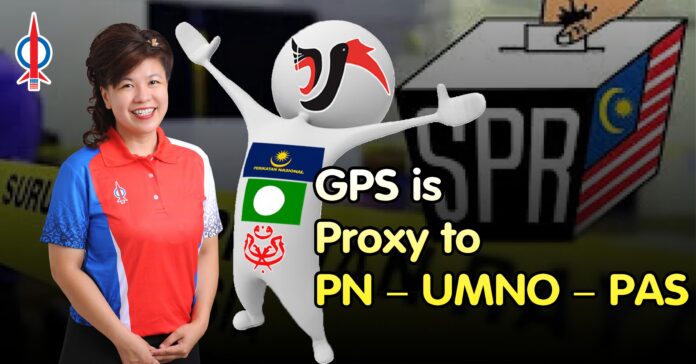 Our claim that GPS is the proxy of UMNO and PAS in Sarawak, is further strengthened by the statement of PM Ismail Sabri about Development in Sarawak will be disrupted if GPS is voted out of government, during his recent campaign statement in Sarawak. Based on this, it is clear as daylight that GPS and PN have a special relation that is beyond of the normal state-federal relation and is deemed beyond the administrative norm similar to a proxy-master relation.

As mentioned in the SUPP’s president Dr Sim’s press release urging Sarawakians to refrain from talking about the new policy that require all Chinese Medical Halls and coffee shops to have additional license to sell alcohol because for time being it is not applicable to Sarawak. Nevertheless, this policy implemented by the Ministry of Finance did not state the exclusion explicitly in its circular with the intention of implementing it in the future. Although, this policy is not applicable to Sarawak for time being, but eventually it will come into effect. In fact, this is the same strategy adopted by the federal government in curbing Sarawak’s immigration control. In the early days all Malaysian from other states needed a passport to enter Sarawak. But now any Malaysian can enter Sarawak without the need to produce passport documentation. The immigration ruling had been eroded bit by bit overtime and now is only used by the current state government to bar individuals who is not aligned with the ruling party from getting into Sarawak.

GPS and SUPP’s noticeable silence on SJKC in Pahang must have only their schools sign board in Bahasa Malaysia is another example of refrained action of the proxy when their federal counterpart does something that warrants reprimanding. At federal level, the culprits are not reprimanded and punished shows that they condone such actions. SUPP who self-claimed to be the champion of the Chinese schools were very quiet about it and didn’t raise a finger about the matter when it was brought up in the Parliamen by DAP’s MP. This implied that SUPP/GPS is supportive or indifference of such action.

SUPP and GPS are indifference to the NGO, namely the Federation of Peninsular Malay Students (GPMS), the Islamic Education Development Council (Mappim), and the Confederation of Malaysian Writers Association (Gapena) which had filed a court case to close down vernacular schools is also another stark example of GPS supporting extremist ideology. They are staying in the sideline in this matter probably due to the restrain meted out by their federal counterparts and these cases were supported by them. The High Court has fixed Dec 29 to decide on a suit against the existence of vernacular schools in this country. If the court finds in favour of those NGOs then all our Chinese schools including those in Sarawak will be closed!

All the above were some of their actions that blatantly shows directly and indirectly that GPS/SUPP is the proxy of PAS and UMNO in Sarawak! Together with SUPP’s offer the right cheek policy, the so called non-Sarawakians related issues is to be ignored because it will not affect Sarawak! The ban of empatnomborekor started only in Kelantan and all people in other states says it didn’t concern them, but now it’s affecting Kedah, the second state after 20 years. So, are we leaving it to chance that our grand children and great grand children be affected by such restrictive polices because we thought it’s not affecting us at the moment? I strongly urge all Sarawakians to give DAP and Pakatan Harapan a strong mandate to monitor the GPS government so that they will be pressured to do the right thing for the state.

When are our children going back to School?

58 Years of GPS Incompetency Highlighted and Admitted By Milton