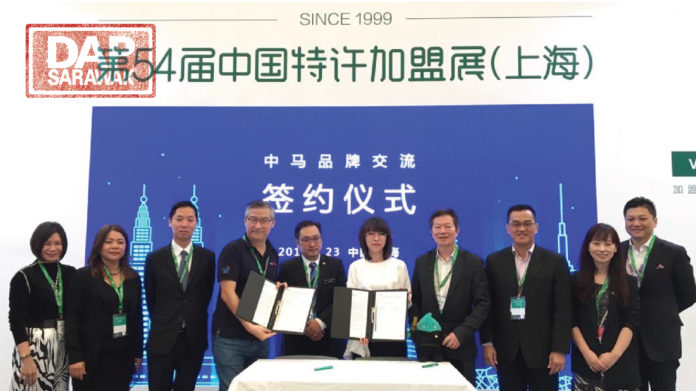 This collaboration will help to enable all the working together in a strategic partnership and trade cooperation between two franchise industries and retail sectors of Malaysia and China.

The MoU was signed at the Shanghai New International Expo Center in conjunction with China Franchise Expo 2019.

Deputy Minister of Domestic Trade and Consumer Affairs YB Chong Chieng Jen is in Shanghai, China for his official working visit initiative under the International Franchise Trade Mission together with the delegation from ministry in conjunction with the China Franchise Expo (CFE) exhibition held at the Shanghai New International Expo Center from August 23 to August 25, 2019.

This is one of the biggest franchise expo in the Asia Pacific region.

Franchise Malaysia community have been active in China for the last 5 years and expected for this trend to grow. Currently, there are approximately 12 Malaysian Franchise Brands in China with 278 outlets as a whole and around 20 outlets are in Shanghai meanwhile China have 19 Franchise Brands that already penetrated Malaysia market.

With assistance from Malaysian agency like (MATRADE), there were now 66 Malaysian franchise brands in 65 countries.

Franchise business is also an important sector in our countries economy as it contributed RM30.3 billion towards our country’s GDP in 2018. The sales of retail and wholesale sectors for the first half year of 2019 amounted to RM112.3 billion.

The Ministry hope that the collaboration with China Chain & Franchise Association will further enhance the development of the franchise industry and retail business in Malaysia.