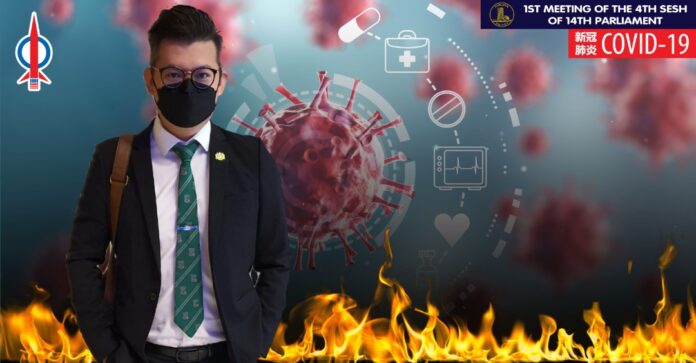 If the Federal government can allocate up to RM 38.5 million for repair works of Seri Perdana, including the replacement of the electrical wiring even when there is no one living there, I also urge the Federal Government to prioritise the necessary upgrades to all government premises especially those under the Ministry of Health now that hospitals and clinics are packed due to Covid-19.

How that fund could have been better used to ensure the health and safety of all patients and staff and make sure they are not put in “flammable death traps” all around the country.

I am glad the Speaker approved my emergency motion under Standing Order 18(1) in Parliament this afternoon as this is a long overdue and necessary concern especially when it comes to fire safety measures in all Ministry of Health (MoH) premises, whether hospital, or government clinics all around the country.

On Sunday, there was a fire at the medical supplies store at Klinik Kesihatan Jln Masjid (Kuching) which destroyed more than 80% of medical supplies including medicine, vaccines, alcohol..etc and more than 40% of the physical building itself. While we were glad there was no casualties, but such issue should not be looked upon as an “isolated case” as there has been fire breakouts in other MOH facilities all around the country including the deadly fire in Hospital Sultan Aminah, Johor that caused the loss of 6 lives.

What is concerning is that we were informed that there are major hospitals around the country that have yet to receive a fire safety certificate including the Sarawak General Hospital (SGH), Pusat Jantung Sarawak and the Sultanah Aminah Hospital in Johor among others. This does not cover government clinics that may or may not have the required fire certificates as well.

Fact of the matter, an independent inquiry’s report on the fatal 2016 Sultanah Aminah Hospital (HSA) fire revealed that HSA did not have a fire certificate, besides alleging that “one of the underlying causes that led to the deaths of patients and injuries to a patient and several staff of the South ICU was the lack of preparedness on the part of the hospital management and staff”.

The inquiry found that none of the South ICU (intensive care unit) staff had undergone training in fire drills or emergency evacuation, despite four previous fire outbreaks in the South ICU in 2008, 2010, and May and October 14, 2016 before the October 25 blaze in that same ward.

However, it was unfortunate that somehow this report and findings was not released to public, and no one was held accountable for their actions or inactions which led to these fire outbreaks. That is why I call upon the Minister of Health YB Khairy Jamaluddin as one of his 100 days KPI to publish the findings of an independent inquiry and also to have a extensive audit of all fire safety requirements of all health facilities all around the country.

This is befitting for the 5th anniversary of the HAS fire this 25th Oct 2021. Transparency will strengthen patient safety, identify opportunities for improvement, increase accountability and build confidence of the public especially when they need to use such facilities.

“Patients entrust their lives on admission, not to get a free cremation.”

We should learn from the findings of the report and not try to sweep the report under the carpet. Learn from it to prevent further deaths in our hospitals.

Besides that, the government must find ways to compensate the families of the six victims of the HSA fire and have additional measures hold those responsible for the disaster to ensure some form of accountability.

On top of that, urge the Ministry to give an immediate commitment on 3 main items

(1) The Governments’ immediate response and to channel necessary resources to help the KK Jln Masjid (Kuching). They will require a temporary air-conditioned container to serve as a temporary medical storage. This must be done withing the next 2 weeks so the clinic can function to it full capacity for good the public

(2) The government must reveal how many government-owned, managed, leased and linked buildings do not have a Fire Certificate, and how many do not even have a Certificate of Completion and Compliance (CCC)?

(3) Government’s efforts to strengthen fire safety measures in all hospitals and clinics all around Malaysia.

Finally, I urge the government to have policy on all levels to ensure that all their buildings, assets, and halls are in fact checked regularly and have the necessary certificates.