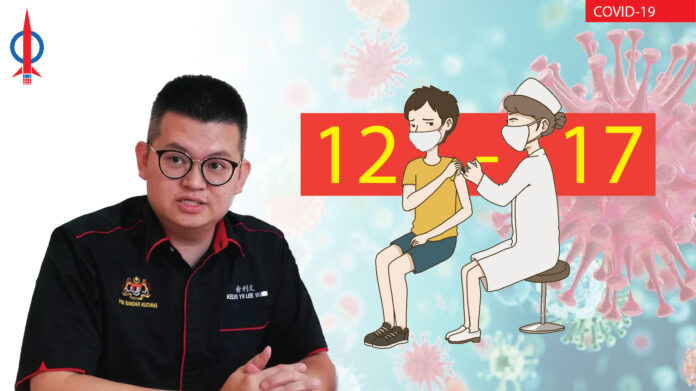 The Federal Government & COVID-19 Immunisation Task Force (CITF) should be making pro-active plans and arrangements to start vaccinating children aged 12-17 years, on top of being compassionate in their approach towards high-risk communities including migrants in order for us to achieve the required 80% herd immunity in our country.

While I welcome the Prime Minister YB Muhyiddin Yassin’s recent statement that they are expecting both the Malaysia’s federal territories of Kuala Lumpur and Putrajaya, and even Sarawak to reach herd immunity as early as August, but such target will not be achieved if we do not include these 2 important groups which make out of a significant chunk of our community.

With children aged 12-18 years old estimated up to 30% of our population, and migrants whether documented or undocumented estimated at almost 5 million, in order to reach sufficient rates of Covid-19 vaccination in the population, the government must look at finding ways to identify and include them as part of the National Immunisation Programme (PICK) as soon as possible.

The recent statements by the minister and the director-general of Health regarding Covid-19 infections and severity in children is indeed a cause of concern. It was reported that 82,341 children had been infected with Covid-19 from 25th January 2020 till 30th May 2021: the vast majority happening in 2021. Infections have happened to children of all ages, including 19,851 in those under the age of 5 years.

The director general of the Ministry of Health (MOH) also reported that three children under the age of five years had died in the first five months of 2021. In addition, 27 children had been admitted to paediatric intensive care units (PICUs) this year, with 19 of them aged under five years.

The director general of the Ministry of Health (MOH) also reported that three children under the age of five years had died in the first five months of 2021. In addition, 27 children had been admitted to paediatric intensive care units (PICUs) this year, with 19 of them aged under five years.

There is growing evidence that children can suffer from Long Covid and be unwell for months after the infection. Although, more data and research is indeed required to come up with a more comprehensive conclusion including determining the size and severity of this problem in children.

While in most cases, the severity of symptoms in children are lesser, but we cannot rule out the risk that children can and do spread Covid-19 to adults which may have more devastating effects especially among the elderly. And with the views of children being exposed in public areas such as schools once it opens, it is important that we find ways to protect them better.

There a countries around the world including the USA, Canada, Singapore, the United Kingdom(UK), France, Germany, Japan and other has given approval for children 12-18 years old to be vaccinated based on available data of vaccine safety for children.

So, I believe in Malaysia the government can make the necessary arrangements to first open registrations to children aged 12-18 as soon as possible in preparation to vaccinate them after the high-risk groups in Phase 2 and economic front liners are main covered. We need to open registration early to educate public on its importance and safety for children and make sure they register their children early.

We cannot wait until the last minute as we will need to monitor registration rates and if needed take necessary interventions if not, we may not achieve the needed herd immunity on time.

On top of that, we must be compassionate and provide some form of protection for the migrant community for them to come out to be vaccinated. The harder the government clamp down on them, the more they will go into hiding. That is why this issue must be looked at in the lens of public health rather than of politics.

The current hard-line stance taken by the Home Minister Hamzah Zainuddin will just hinder the efforts by our healthcare officers and not only cause us not to achieve the necessary herd immunity, but also allow the outbreak to continue to damage even our local population on our country’s economy.