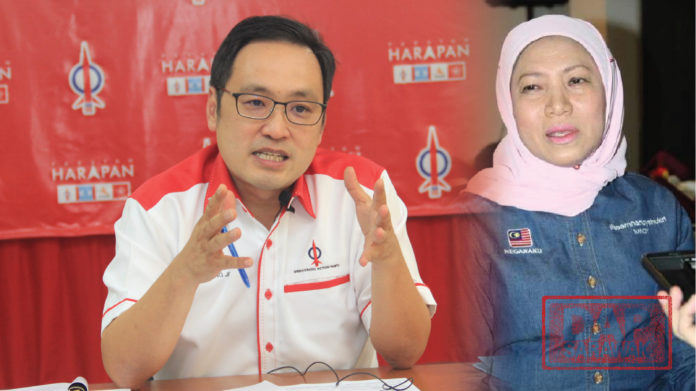 Najib has been an internationally well-known kleptocrat, the leader who steals from the country and her people, until he was voted out by the people on 9-5-2018. He has, during his tenure as the Prime Minister, stolen huge sums of money from Malaysian taxpayer including many Sarawakians. No decent citizens in their right minds will support such a person to be their leader.

I believe most Sarawakians have the basic dignity and honour not to want a kleptocrat to be our leader.

As an elected representative from GPS, Nancy Shukri has every rights to speak on behalf of GPS. In fact, it is no wonder that the GPS supports Najib as the Prime Minister because the GPS has a share in the loot of 1MDB, the largest money laundering scandal in the world.

However, to claim that she is in the position to speak on behalf of Sarawakians and that Sarawakians support Najib to be the Prime Minister, that is most ridiculous.

Not only is Nancy’s assertion ridiculous, it is also insulting and bringing disrepute and shame to us Sarawakians. She speaks as if all Sarawakians have no basic dignity and honour that we will support a thief to be our leader just because the thief gives us some of his stolen money.

In fact, Nancy Shukri’s claim that Sarawak benefited from Najib in terms of allocation is also untrue. Maybe it is the Sarawak BN leaders who have personally benefited tremendously from Najib, but surely not the common Sarawakian. Take for example the RM1.2 billion rural school electrification project which was supposed to provide electricity to 400 rural schools, the allocation ended in the pockets of the shareholder of Jepak Holdings SdnBhd who is Nancy Shukri’s colleague in PBB, while the rural schools remain not connected to grid.

Therefore, it is a fallacy that Najib has given much allocation to Sarawak. That is what the GPS wants Sarawakian to believe because under Najib, the Sarawak BN leaders can act corruptly and get away with it, making huge personal gains from the so-called allocations.

Nancy Shukri’s statement only exposes the hidden political agenda of the GPS to help Najib and his UMNO to regain power in the next General Elections. That also explains all the sabotage by the GPS of the major initiatives of the PH Government for Sarawak, for example:

1.Working together with UMNO and PAS to defeat the constitutional amendment bill for Sarawak and Sabah to regain their constitutional status at the time of formation of Malaysia in 1963;

2.Making it difficult and almost impossible for the disbursement of RM1 billion fund for the repair of the dilapidated schools in rural Sarawak;

4.wrongfully and maliciously accusing the Federal Government of withholding allocation for Sarawak when there were no such allocation in the first place.

The good side of Nancy Shukri’s statement is that it reveals the true colour of GPS and its hidden political agenda. If GPS wins the coming State Elections, it will pave the way for Najib and UMNO to make a comeback and regain federal power in the 15th General Elections.