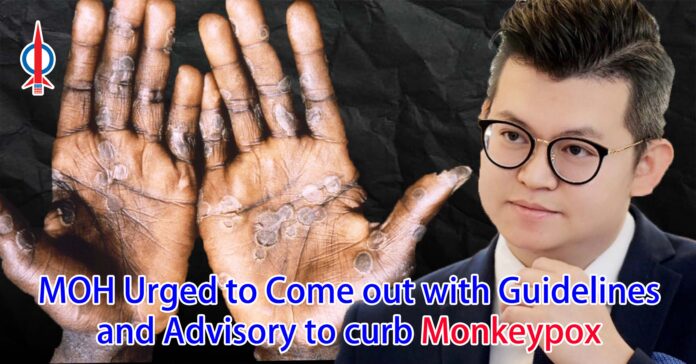 The Ministry of Health(MOH) should come out with clear and specific guidelines on “Monkeypox” for the public including advisory for those intending to travel to destinations that are currently experiencing outbreaks as a precautionary measure to prevent the disease from spreading to this country.

Recently, the World Health Organisation has held an emergency meeting into the alarming spread of the virus around the world and said that while majority of infected patients had recovered without complications, we should still take it seriously.

As of Saturday(21/5/2022) the WHO reports 92 confirmed monkeypox cases and 28 suspected ones in 12 nations as the mysterious spread continues namely Australia, Canada, United States, Belgium, France, Germany, Italy, Portugal, Spain, Sweden and the United Kingdom.

More cases are of course are likely to be reported as surveillance expands.

That is why proper guidelines and recommendations must be issued by MOH including advising Malaysians that are planning to visit countries affected by the monkeypox outbreak to get vaccinated beforehand to protect themselves against the virus.

The World Health Organization (WHO) guidelines recommend getting the existing small pox vaccine or even chickenpox vaccine which is said to be 85 percent effective against monkeypox.

At the same time, the government should also look at ways to intensify control at the country’s borders, including monitoring the entry of individuals from countries affected by the outbreak. Public should also be educated and given guidelines on monitoring monkeypox symptoms, including if needed quarantine period to prevent local transmission,”

Those who are experiencing symptoms after returning from the countries involved should be advised to immediately seek medical examination. So far, the virus has not been reported in Malaysia so we have to be extra vigilant.

The virus originated in monkeys and spread to humans through contact with body fluids such as saliva, nasal mucus and phlegm.

It can cause symptoms including fever, aches and presents with a distinctive bumpy rash.

While majority of infected patients had recovered without complications within 2-4 weeks, and the mortality rate was also low, at about 1 percent compared to chickenpox, which was around three to six percent, it shouldn’t be taken lightly.

That is why the government must be pro-active in this matter. In order to build strong public confidence and not cause any unnecessary panic, the public should be given all the necessary guidelines, advisory and recommendations so that they are better educated and informed on this important issue.