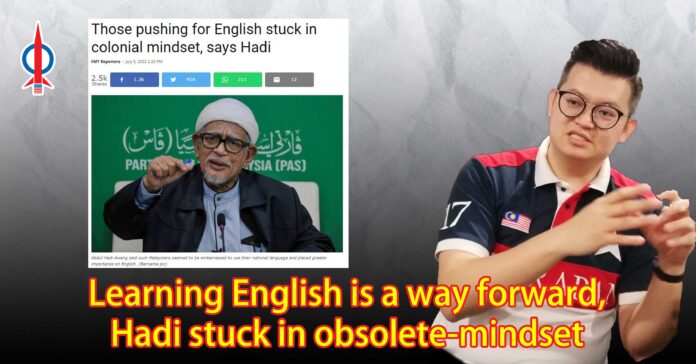 PAS & Hadi Awang’s myopic view claiming that those that “pushing for English and said they are stuck in colonial mindsets” not only exposes how irrelevant PAS is in our modern world, but also dangerous as it will not only further erode our competitive edge in the international market, but also bring us backwards and making sure that we kept being left behind even in comparison to our neighbouring countries.

However, those that do not encourage the mastery of multiple languages on top of our national language especially when English is used as international language of business, commerce, science, medicine, diplomacy and many other key areas are those stuck in the old-age, and should not be allowed to hold positions that influences policies of the nation.

Many instances, leaders such as them rile up such narrow nationalistic sentiments including on our national language mainly to cover up on their own inadequacy in the matter, or to distract the people from real matters affecting the people which the government has failed to address, including the rising cost of living and food prices.

Their arguments used to justify their arguments are often flawed and not taking into account recent developments in those countries itself.

But fact of the matter is many major companies including the government of Japan have made huge strides to promote the use of English in their daily business.

Car-maker giants Honda followed Nissan’s move to adopt English in 2013 and since 2020, Honda executives cannot be promoted until he / she passes an English competency test.

So, it is concerning that in Malaysia instead of diversifying and encouraging a greater mastery of multiple languages especially when it comes to English, we seem to be going backwards.

Our leaders must realise that we live in a competitive, volatile, globalized era, where cross-border partnerships are essential for survival, which also implies the need for multi-cultural awareness.

The ability to speak multiple languages has always been Malaysia’s strength especially for us to remain competitive in the global market. The need to promote the use of national language should not be an excuse to curtail nor discourage the use of another.

And those that are promoting such narrow views, are those actually trapped in a “obsolete-mindset”