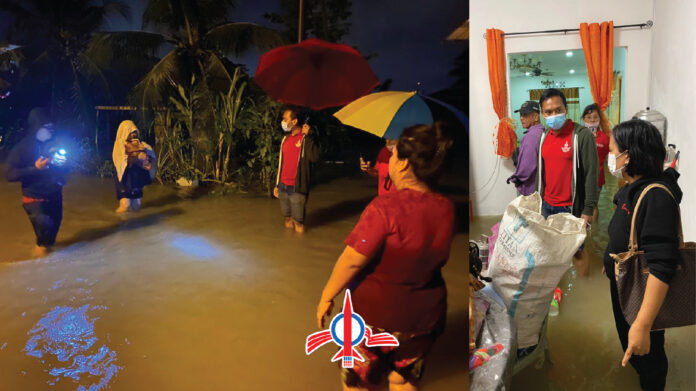 Last night, I went to several places to monitor the situation which were badly affected by the flood. During my last stop at Desa Wira Resettlement Scheme, I’ve noticed that the Bomba has insufficient logistic assets to evacuate the flood victims. I personally saw it with my own eyes that there’s only one FRB available to evacuate those flood victims especially Persons with Disability (OKU), elderly, children and pregnant women. Some even have to carry their own elderly parents for more than one kilometer just to move out from the affected areas.

One of the flood victim told me that she has been waiting for hours for the Bomba personnel to come over to evacuate her children. As the floodwaters rise to nearly two-feet, they have no choice but to carry their children out from the affected area by walking.

Sarawak is blessed with an abundance of natural resources, and yet only one FRB was available to rescue hundreds of flood victims at Desa Wira Resettlement Scheme. Although, a totally different scenario happened in Peninsula Malaysia a few days ago. It seems like every Fire Station in Peninsula Malaysia were equipped with sufficient units of FRB. Unlike in Kuching, it’s totally the opposite. How can such a thing happen to us here? Are we being treated unfairly despite being part of the Perikatan Nasional coalition?

It’s shameful that the GPS-led state government talked so much about having its own light rapid transit (“LRT”), hydrogen bus service system, Digital Village (“DV”), and coastal guard, yet they failed to provide sufficient units of FRB which cost the state government below RM1 million.

Such talk is useless if the state government fails to provide basic necessities and keep their priorities straight.

Since the floods in the affected areas doesn’t seem to subside, on behalf of the Bomba, I urge both federal and state governments to provide more FRB and necessary equipments.