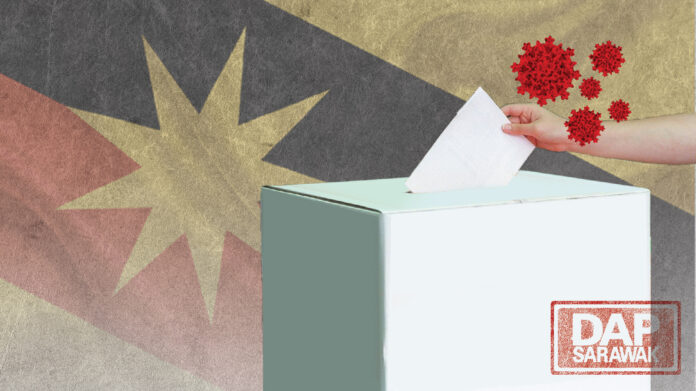 GPS’s insistent call for early State Elections this year is putting the lives and health of Sarawakians to great risk of Covid-19 infection. It is a manifestation of self-interest on the part of GPS to take advantage of the Covid-19 pandemic for its political expediency.

The fact that at present there is only single-digit new infection case in Sarawak is no assurance that there will not be outbreak if State Elections were called.

The following are the new Covid-19 infection cases record of Sabah before the dissolution of the Sabah DUN:

In the case of Sabah, it was single-digit new infection cases with many days of zero infection cases before the dissolution of the Sabah State Assembly till close to the nomination day.

Thereafter, the cases spiked to double digit and after the polling day, it went to 3-digit new infection cases.

The current situation is worse if compared to the time when Sabah State Assembly was dissolved on 30-7-2020.

Given the precedent of Sabah, it would be foolish and most irresponsible of the GPS Sarawak State Government to be complacent and to take the pandemic lightly by dissolving the current Sarawak DUN and going into the State Elections in the midst of this pandemic.

In the case of Sabah, the then Chief Minister had no choice but to dissolve the State Assembly because of the coup by UMNO.

For Sarawak, Abang Jo does not have a coup problem. He has until June 2021 to dissolve the State Assembly. As such, there is no justifiable reason for him to rush into the State Elections this year. Therefore, I call upon Abang Jo to give priority to the lives and health of Sarawakian and not the political expediency of GPS by not dissolving the State Assembly and calling for State Elections in the next 6 months.