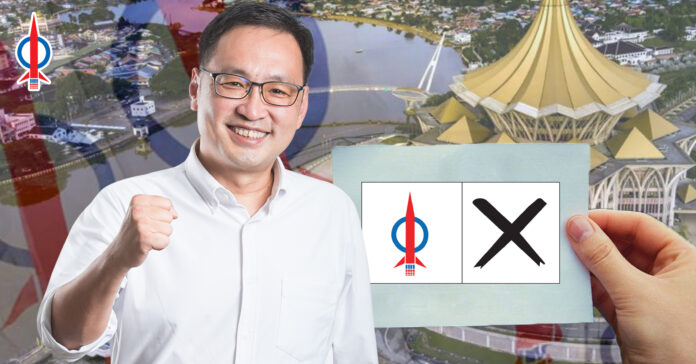 Calling on the voters not to split votes amongst the Opposition, and to concentrate and focus your votes on DAP to form a stronger opposition in DUN for more effective and stronger check and balance.

Amongst the Opposition, there are 3 main narratives and objectives, namely, the call for change of government by PSB, the call for independence by PBK and Aspirasi and the call for stronger opposition for good governance by DAP.

The following are my analysis of the Opposition parties in the State Elections.

The Independence call by the PBK and Aspirasi are not only hollow but dangerous. It is hollow in the sense that it fails to address national and international policies on running the country. There is even no mention on defence issue.

Moreover, in the short video propaganda of the PBK and Aspirasi, they cited a few countries which has successfully gained independence. But they have conveniently left out the part that these countries went through years of civil wars where economy was ruined and many lives were lost.

In the case of Kosovo which was widely cited by the PBK, when Kosovo declared started the independent movement, the Serbian military started the supress. More than 2000 civilians died and 400,000 became refugees in 1998 – 1999 before NATO stepped in. Till this day, it is still relying on NATO to provide for its defence against the threat of invasion by Serbia. Till this day, China, Brazil, Indonesia, India and more than half of the countries in United Nations have not recognised Kosovo as a nation.

For PBK and Aspirasi to hide the facts of civil war and lives lost in these countries, that is highly irresponsible.
I believe not many Sarawakians want to go through civil war and risk their lives and that of their children’s.

Chances of PSB to change Government Amidst all these calls for change of government, what is the possibility of PSB winning the elections against GPS?

Throughout the history of Sarawak, the 1987 (Ming Court affair) was by far the closest the Opposition in Sarawak came in toppling BN. At that time, 4 State Ministers and 3 Assistant State Ministers resigned from their posts and stood against BN together with 20 other incumbent ADUNs. It had a Chief Minister designate in Tun Abdul Rahman Ya’kub. Yet, they failed.

By comparison to the present PSB, only 1 Minister from the GPS quit and lead the party together with 4 other ADUNs fighting against the GPS. We are in the final few days of the campaign period and yet PSB still cannot name a Chief Minister candidate.

Furthermore, to start with, PSB only contested 70 seats thus already conceding 12 seats to the GPS. Therefore, if PBDS couldn’t do it back in 1987, there is even much less chances of PSB doing it in 2021.

Though in 2018, at federal level, we managed to change the Federal Government, but that was the build-up from the 2 general elections in 2008 and 2013 where we managed to deny the BN of its 2/3rd majority in Parliament. In Sarawak, the Opposition has not even once denied the BN or GPS its 2/3rd in DUN.

What will become of PSB after the Elections?

Most likely, the PSB may just win some seats and thereafter join the GPS, after all, most of the candidates of PSB have their roots in GPS.

It is obvious from the history of Sarawak that all local-based Opposition parties, no matter how strong they were at one point of time, will at the end of the day join the ruling party.

Therefore, a vote to PSB may most likely become a vote for them to join the GPS after the election and that would be a wasted vote.

We understand that many are disappointed that some of our electoral promises were not delivered. Had we had our full 5-year term, I believe we would have done better.

The PH federal government’s 5-year mandate was cut short to 22 months due to the betrayal of some PH Members of Parliament. As such, many of our electoral promises could not be delivered within such a short period.

DAP has always stood by the principle of good governance and integrity. It is proven that despite much temptation thrown to us, no one of the 42 MPs of DAP has betrayed the trust of the people. That provide the strong basis for our call for a stronger opposition for good governance in this Elections.
One thing for sure, we did not take a single cent from the people through corruption or cronyism. Instead, we tried our best to clean up the system and have saved the country billions of Ringgit through reviews of the mega contracts awarded by the BN before 2018.
Given the extravagance of Abang Jo, for example, spending RM30 million to build a school with 250 students, it is all the more important that we cannot give the GPS a blank cheque to squander our State’s money.