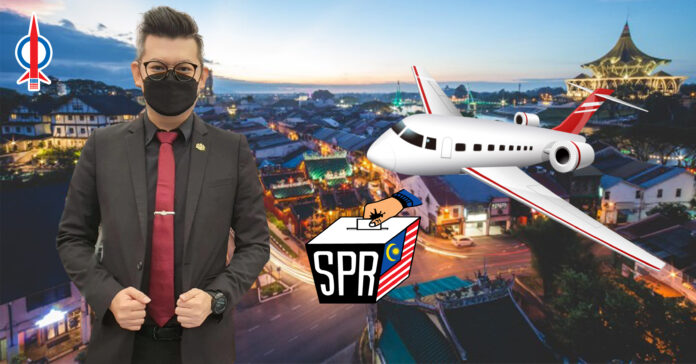 The Federal & State Government must do more and step in and to ensure that prices of tickets are more affordable for Sarawakians to travel back to vote in the upcoming Sarawak State Elections in spirit of democracy and promote greater participation of fellow Sarawakians in the election process.

Such exorbitant price especially in the case of flights into Sarawak, was said to be due to the severely limited flight frequencies imposed by the Sarawak State Disaster Management Committee (SDMC) which resulted in reduced supply of flights thus leading to the sky-high prices beyond the affordability of any common Malaysian.

However, even with the announcement by the Minister of Transport Sarawak Dato Sri Lee Kim Shin of the increasing of frequency of flights to Sarawak from 223 to 307 weekly, starting this Dec 11, the prices of flights into Sarawak around the election days are still high which may serve as a deterrent for many to come back to carry out their constitutional duty to vote.

While there was a news report saying that with the approval given for additional flights to Sarawak, airlines like AirAsia have dropped the price of tickets to Kuching from Kuala Lumpur to under RM200.

However, a quick search on their website does not show any availability of such flights at such prices with very limited flights available at about Rm300 one way and many others still more than RM 1000 one way. Even the cheaper-priced flights are so limited and unable to cater for the demand especially those wanting to travel back to vote.

That is why I believe both the governments should step in and find ways to incentivize people to go back to vote. This could be done through a subsidy scheme by both the Federal & State Government in collaboration with all the airlines.

I propose that flight tickets to and from Sarawak, as well as within Sarawak to be offered at an affordable flat rate for a week — 3 days before and 3 days after the election on Dec 18. Such prices should be offered for a few flights to cater for the demand and not just limited for a few seats.

This has been done before and I am sure it can be done again.

In conjunction with the 14th General Election in 2018, AirAsia offered fixed fares as low as RM99 to encourage Malaysians to return home to cast their ballots.

Such model could be followed again to encourage more people to fly back home. Election is a celebration of democracy and is the constitutional right of every eligible citizen. No one should be left out.

That is why I call upon the government to step in and provide the necessary assistance including SDMC to facilitate more flights into Sarawak to repeal any allegations that it is being used for undemocratic purposes including to increase obstacles for Sarawakian voters residing outside of Sarawak from coming back to participate in the upcoming state elections.