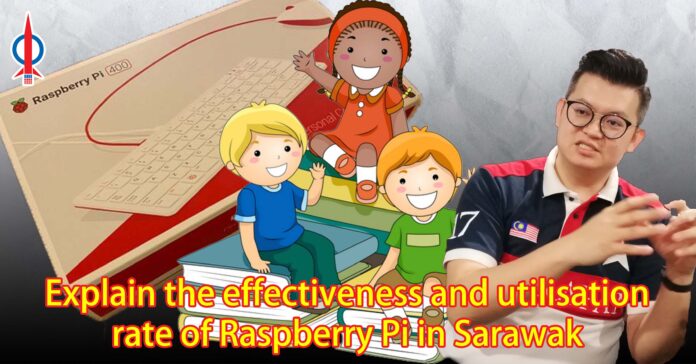 The Sarawak government and the Minister for Education, Innovation and Talent Development must provide a clear and transparent report on their purchase of Raspberry Pi computers for all Primary Schools in Sarawak to properly determine whether it has achieved its target in terms of rate of impact for students in each school as well as its rate of utilisation in all schools, whether urban, semi-urban or rural schools.

This is to properly review the Sarawak government’s decision to spend RM 12 million to purchase as estimate of about 10,000 Raspberry Pi computers for all 1265 Primary Schools in the State reportedly at the end of year 2020 to ensure that there is no elements of wastage and that it is properly used in all the schools to aid in the teaching of the students in schools.

First and foremost, in the spirit of transparency and accountability, the government must reveal exactly how many units of these compact single board computers was purchased, how many was sent to each school, exactly how much was spent for each of the unit and which company received the contract to supply such devices to the Sarawak Government to ensure there are no possible corruption during the procurement of these devices.

More importantly, has these devices been properly used by the schools for the benefit of the students as it is not as “user-friendly” and powerful as a normal PC or laptop which has become a necessity for students of every level?

We have heard feedback that many teachers and school staff find it difficult to use these devices and there are many hurdles to even properly update or download each programme that are needed to get it running. Due to that, it has been left aside and not fully utilised.

Raspberry Pi uses a Linux Operating System (OS) called Raspbian OS. Installing software are time consuming & complicated for majority of teachers and educators. While it may be a good device for engineers and even programmers to utilise to program things on a low-cost device, it may be a bit more complicated especially for primary school students.  It also DOES NOT run Windows or Mac, which students and teachers are often used to.

The teachers were not given proper training on how to adapt to use the device and this has proven to be a hurdle for it to be effectively used for the full benefit of the students.

Even with the little training they receive, after awhile of not using it, the tendency is for the educator to forget how to use it fully and that in time takes up precious teaching time and add much more burden to the teacher’s already full schedule.

The government cannot just provide infrastructure without intensive instruction. It must come hand in hand in order to achieve long-term acceptance and effective usage.

Imagine such issues happening in the urban schools, it be worst in the semi-rural and even rural schools were internet connection which is needed to run and update the programmes are severely limited.

Again, this is not the fault of the teachers and educators as the government should have been aware of these technical issues and implementation hurdles since the beginning. All these tech devices should be user-friendly and easily adopted so that it does not create technical barriers for it to be fully utilised.

The key to effective education is to remove barriers, not add them and provide obstacles to learning.

While I acknowledge the usefulness of a Raspberry Pi in many other instances, but I have since the beginning question the suitability of these Raspberry Pi to provide a conducive learning environment for our primary school students especially in semi-rural and rural areas of Sarawak.

So, at the end of the day, if the Minister’s intention for the schools to replace the normal desktop, then the choice of these Raspberry Pi is not suitable, and we do not want to end up wasting RM 12 million for something that may not be user friendly for the students and even teachers while will then not achieve the conducive learning environment it intends to.

That is why the Minister should come out with the justification on the choice of such computers for our primary school students and reveal the important parameter I mentioned at the beginning to fully review its effectiveness and if it achieves its target.

My suggestion has always been, if the government intends to narrow the digital gap between the rich and the poor and also those in urban and rural divide, then I suggest they look at finding ways to assist the students to purchase proper laptops so that they can also use for their home-based learning especially after taking lessons from Covid-19 season.