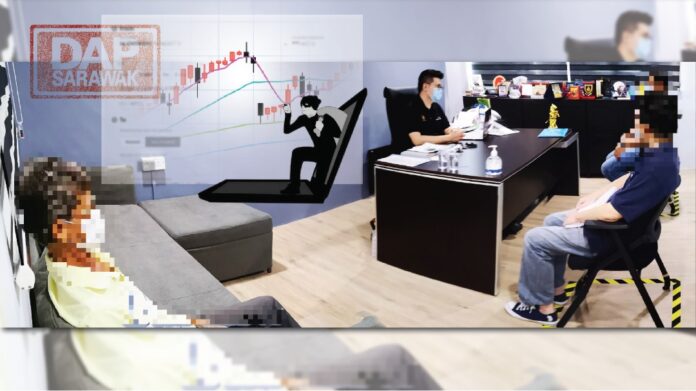 Members of the public are reminded to be extra careful and not to fall victims of investment scams especially if it involves promises of returns that “may seem be too good to be true” as often it is indeed to good to be true.

Recently, a group of victims from an alleged scam approached our office to seek for help and share their concerns and predicament of being conned up to RM 400k per person after investing in a alleged sham company based in Rawang, Selangor that has since been closed down. The local office that used to be located at Icom Square, Kuching has also since been closed.

They also alleged that up to 2000 Sarawakians has also fallen to this scam, all enticed to invest into different investment packages including “Carpool”, “Global Market”, “Education” and many others, promising returns up to 10% monthly for 24 months, redeemable RM 35k cash certificates or even claiming they are guaranteed to claim a “Perodua Axia” within in 6 months of the investment.

The entice victims through different means including fancy dinners organised here in Kuching for up to 200 tables. They were then asked to make cash deposits to mainly 2 bank accounts which they claimed as official partner company accounts.

However, upon further checks on these companies, they were just companies registered to sell sports attires and anther to sell vegetables and fruits.

Because of this, the victims were cheated of their life savings, pensions, and even children’s education fund. One of the victims shared that he almost went bankrupt as he was enticed by these scammers to borrow extra money from loan sharks just to top-up on their investments.

They have since lodged a police report and I urge the police to take all the necessary actions and investigations swiftly. A report to Bank Negara against the company has also been made. Such act can be investigated under Section 420 of the Penal Code for cheating and fraud.

That is why I urge for all investigation by the police to be carried out properly and I will continue to follow up on this issue to make sure it is not swept under the carpet.

I also want to encourage other possible victims of such scams to avail themselves and we can assist them will all the necessary police reports and procedures. This is also so that the police can build a stronger case against the people responsible so they will not get away and face the required justice.

Members of the public must also play their role to be aware and careful of such scams and do all the necessary due diligence before investing their money into schemes that may seem to be too good to be true.

Now, when the economy is tough, there may be more and more of such scam emerging and that is why we all need to be careful including sharing with all your family members and friends who may be tempted to invest due to this trying times.

We must not ever overlook the finer details of any investment schemes and its always better to do all the necessary checks and to lean on the more cautious side before parting with their hard-earned money.