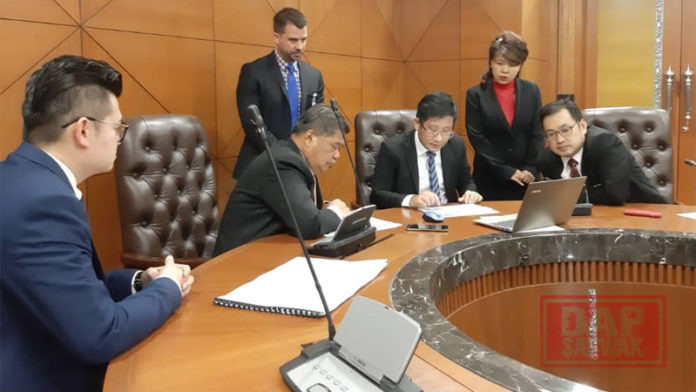 Few elected representatives and leaders from Sarawak including YB Chong Chieng Jen, YB Kelvin Yii, YB Violet Yong and YBhg Julian Tan were in parliament to meet the Minister of Defence YB Mohamad Sabu to follow up and discuss a few issues involving our maritime borders near Sarawak And also to follow up on efforts to secure the release of our Malaysian fishing boats including those from Sarawak that was intercepted by the Indonesian authorities including 2 fishing boat registered as QKH9393z and SF1-2929 from Sarawak.

The efforts to resolve this long time issue will require the efforts of multiple Ministries including the Ministry of Defence, Ministry of Agriculture and also Ministry of Foreign Affairs. This meeting is a further follow up to previous meetings we have with other Ministers as a follow up To push for the fast release of these ships as well as to find a proper long-term solution to the disputed waters between Malaysia and Indonesia which has affected not just our fisherman, but the whole fishing industry itself.

Both these boats were said to have encroached into Indonesia waters even though the coordinates provided by both boats at point of arrest were said to be within our Malaysian waters. I was informed that actually the Malaysian and Indonesian government have signed a Memorandum of Understanding (MoU On November 2017 in Kuching.

This MoU states that there is an understanding that any fisherman that is being caught will be released swiftly as majority of such cases was done unintentionally especially due to the confusion of our maritime borders. Both countries have agreed that most Of the fishermen involved are also from the lower socio-economic status that are fully relying on their fishing activities. That is why they should be released swiftly including their boats and fishing equipment.

In the meeting with the Minister, we asked for all these negotiations to be expedited including to urge the Indonesian Authorities to respect the terms and conditions of the signed MoU between our governments. We also proposed to the Minister to increase Maritime security especially around our borders Not just to guard against national threat or even terrorist, but also to guard against foreign fishing vessels that trespass into to our waters to fish and steal our maritime resources. We were informed that our country lose up to RM 7 billion worth of fish and maritime Resources existing before due to these foreign fishing vessels trespassing to our waters and using illegal methods to fish and deplete our resources. We were informed a lot of these foreign vessels are from Vietnam and even Indonesia.

We were also informed that the Ministry of Defence is doing all their can to increase securities around our maritime borders including requesting an additional RM 200 million which was approved in the Supplementary Budget Bill to purchase more assets to better guard our borders. The current assets have Not already maintained properly and is inefficient to handle the growing issues nowadays. We thus proposed them to increase all these proper and modern maritime assets including deploying modern scanners and even military surveillance UAV to watch our borders especially in Sarawak and the borders of the South China Sea. This includes advance surveillance technology that employs innovative, integrated and actionable intelligence across all departments and agencies to create a Maritime Domain Awareness to better monitor our maritime borders.

We will continue to follow up on this issue and hope that a long term solution can be sort out amicably between the Malaysian and Indonesian government for the benefit and security of our people, but also for the interest of the industry that will help propel our economy Forward.