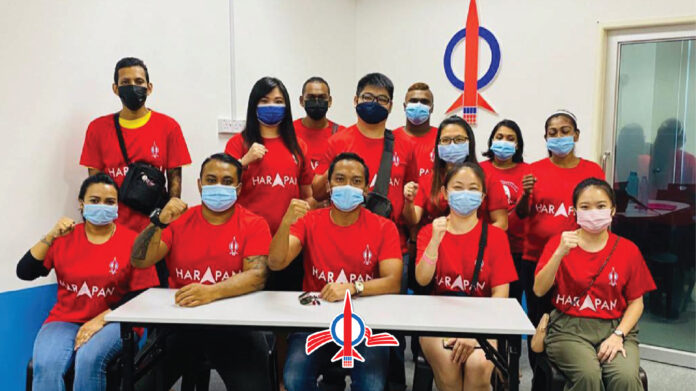 He pledged to give his undivided effort to work for the people and party. He is also determined to continue to work harder with the new committee line-up for the benefit of the community in Stampin especially on issues pertaining road maintenance, welfare assistance, the setting up of more recreational and sports centres, provides equal job opportunities, efficient public transportation, improving internet connection speed, maintaining peace and security in residential areas, curbing drugs abuse, and perimeter survey for Native Customary Rights (“NCR”) land.

Addressing the members at the AGM, Aziz Isa told DAPSY Stampin members to close ranks and face the challenges ahead together. He reminded the party members that although DAP is no longer a part of the ruling party at the federal level, the most important thing now is for the party to focus and remain united in facing the challenges ahead especially in the upcoming state election. This is because the next state election will be an uphill battle for all political parties.

The state election is predicted to be called somewhere in the middle of March this year after Chap Goh Meh and before the month of Ramadhan. Pakatan Harapan (“PH”) Sarawak has recently announced the seats that component parties will contest. Therefore, DAPSY Stampin is making preparations for the upcoming state election DAPSY Stampin and will ensure that the party will capture both Batu Kitang and Batu Kawah state seats with a resounding majority.

Although SUPP won both Batu Kawah and Batu Kitang constituencies, they failed to keep their promises and resolve major issues the public faced. Despite that they are now part of the ruling government both at the state and federal levels, they are still trying hard to blame DAP for their failures. It indicates that SUPP is more interested in playing politics rather than helping people. As such, it’s high time for the voters in Batu Kitang and Batu Kawah to vote for new state assemblymen who know how to solve practical issues and take accountability for their actions.

The AGM was chaired by Leslie Ting Xiang Zhi who is also DAPSY Sarawak Organising Secretary.