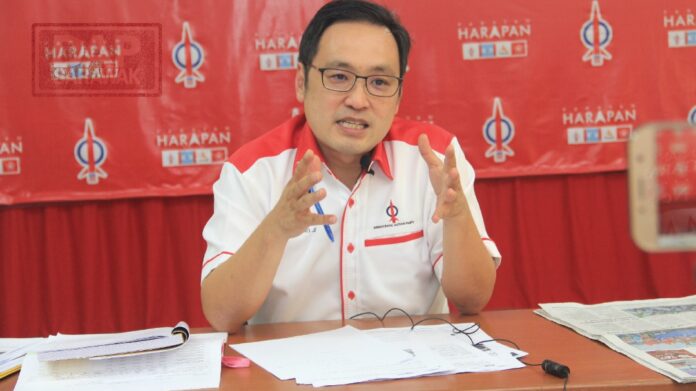 Abang Jo’s announcement today on the Post Covid-19 Exit Economic Strategy up to 2030 is a huge disappointment to the business sectors in Sarawak.

To start with, this is not the time for Abang Jo to talk about his vision and road map to 2030.

It is the time when he should be focusing on the immediate, short and medium term solution to the economic recession and hardship brought about by the covid-19 pandemic.

The Bank Negara Malaysia (BNM) forecasts that Malaysia’s economic growth will be in the -2.0 percent to +0.5 percent range and it is estimated that 951,000 people will lose their jobs.

The Malaysian Global Innovation and Creativity Centre predicted that about 40 percent of small- and medium-sized enterprises will have to wind up their operations if the COVID-19 chain of infection persists for three to six months.

We are now in the second month of the Covid-19 infection chain and it looks like we will be going into the third month very soon with not much of light at the end of the tunnel.

Extrapolate these projected figures to Sarawak’s economy, we will be looking at about 90,000 people losing their jobs and about 40% of Sarawak’s SMEs closing down.

With such immediate gloomy economic outlook, it totally makes no sense for Abang Jo to talk about his vision and road map to 2030. Furthermore, the two core principles mentioned in his announcement, namely digital economy and environmental sustainability are nothing new. He has been talking about these 2 core principles since he took the helm of Sarawak in January, 2017.

To make an announcement of the Government’s plan up to 2030 at this critical time only shows that the Government has no clue as to how to save and revive our economy from the onslaught of the covid-19 pandemic. This is also evidence in that the Sarawak Economic Action Council is asking for views from all stakeholders to be submitted by September, 2020 which is 5 months away.

I just wonder how many SMEs would have closed down and how many tens of thousand people would have lost their jobs by then.

To help save and revive the economy at this juncture, it is not time to show-case one’s vision or dream in 2030 but the need to take concrete and effective measures to help SMEs to stay alive.

To this end, I propose the followings:

The above 3 thrusts will need a lot of money and effort for implementation. Therefore, I urge the State Government to seriously look into it and take immediate steps for their implementation.

Once again, this is not the time to talk about 2030 but to take immediate action. As the famous quote of great economist, John Maynard Keynes said, “In the long run, we are all dead”. We need to survive the current crisis before we can think about 2030.