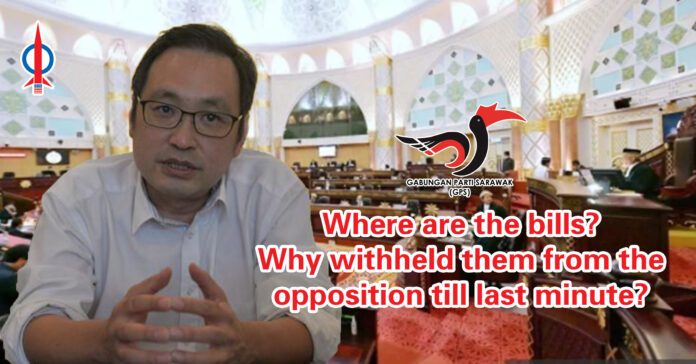 The Sarawak DUN will commence its first sitting on 14.2.2022, yet the Opposition ADUNs have not received any bills to be tabled in the sitting.

Yesterday, YB Abdul Karim indicated that there will be some “interesting bills” to be tabled in the coming DUN sitting, but that he declined to disclose the content of such bills. That means, copies of the bills are ready but that the Government refused to give prior notice or more time to the ADUNs to read the bills before the debates.

Today. The speaker held a press conference to announce that there will b 5 bills to be tabled in the coming sitting. The speaker had the time to issue press statement but no time to forward the bills to the ADUNs? Was the content of the bills deliberately withheld from the Opposition ADUNs till the last minute?

Basic principles of parliamentary democracy dictates that the elected ADUNs must be given ample time to vet any bills to be tabled and do proper research before debating on such bills.

With the sitting starting on Monday and debates on the bills to be on Tuesday and Wednesday, yet copies of the bills not forwarded to the ADUNs before the sitting, the GPS Government is depriving the ADUNs sufficient time to go through with the bills before the debates thereon start.

Is the GPS Government with its 76-ADUN majority now treating the DUN with such disdain and as rubber stamp of Executive?

With its super-majority of 76 ADUNs in DUN, the GPS Government can now easily bulldoze through whatever bills that it tables in DUN without much hassle.

Nonetheless, though the Opposition is now reduced to only 6 ADUNs in DUN Sarawak, the GPS Government and the Speaker must show its respect to the institution of DUN Sarawak by adopting the best practices of parliamentary democracy.

We should not allow the arrogance of this 76-majority in DUN destroy the integrity and sanctity of the oldest legislative body in Malaysia, DUN Sarawak.