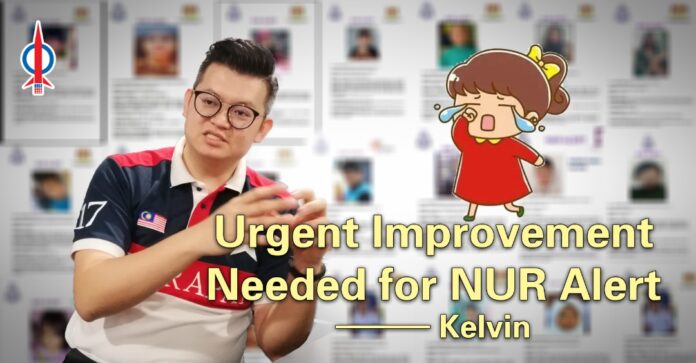 There has to be an urgent improvement in the National Urgent Response Alert (NUR Alert) to make it more accessible when it comes to missing children to ensure that the alert is sent out fast and has the widest outreach to fasten the investigation process and increase chances of children being saved.

This is in view of the latest missing child report of a 4-year-old boy who until has not been seen since he went missing on March 7 from a house in Taman Riverview, Bintawa. This is something serious and I am disappointed that the alert and awareness of the missing child is not widespread even among the residents and public of that area.

NUR Alert is supposedly responsible to spread information quickly and as fast as possible through SMS/MMS to help trace missing children (below 12 years of age) who could be victims of crime or abuse.

When it comes to missing child, time is of the essence and a quick and widespread alert is important to increase chances of the child to be discovered quick and for the law enforcement agencies to carry out their investigation faster which will lead to fast arrest.

Such alert is also important to inform the public to keep a good lookout and this is the best weapon to limit movements of alleged abductors and even deter anyone from planning any abductions.

However, the accessibility of this Nur Alert is very limited and from this case alone, I have double checked with multiple people that lives in the area and they themselves have not received any of such alert.

Based on the announcement by Malaysian Communications and Multimedia Commission (MCMC), it is announced that cellular users must first go through some procedures and choose to accept the NUR Alert announcement before its being sent.

This for me creates all kinds of barriers and limits the outreach of this alert which is the most important factor for it to be effective and quick. Instead we receive all kinds of unnecessary SMS from Majlis Keselamatan Negara(MKN) especially during this period and even promotion of Keluarga Malaysia events on our phones without consent.

When it comes to saving children’s lives, they create barriers, but when it comes to government propaganda and unnecessary SMS, they send anyways without our consent.

That is why there must be a significant improvement to this alert system. We cannot just rely on enforcement officers sticking photostated “missing person posters” at bank or even public notice boards. We need to adopt technology to ensure the alert is quick and widespread.

First and foremost, there must be a single platform where all such important information can be accessed directly not just by different enforcement agencies, but also by shopping malls, banks, elected representatives’ office, cinemas, members of the public and many more.

Any obstacles to obtain such an alert especially all kinds of confusing consent procedures should be removed.

Once such information is obtained it can be spread out on all social platforms including Facebook, Instagram, Telegram, Whatsapp and even SMS/MMS of residents in that area. That way, malls can show it on their digital noticeboard, banks can show it on the ATM screen for few seconds before the public withdraw their money or many other ways to spread the message quicker and clearer.

Then should also create a platform for public to inform the authorities quicker when they see a suspicious behaviour, or they see the missing child from the alert they received. This will fasten the reporting process and fasten the investigation process by the authorities thus increasing chances of the child to be found.

I strongly believe the public will understand and be supportive to receive such an alert on their phone rather than all kinds of unnecessary spam and government propaganda on their phones especially when they can participate to save a child’s life. That is why the whole NUR Alert system must be significantly improved as every seconds count when it comes to saving a child’s life.