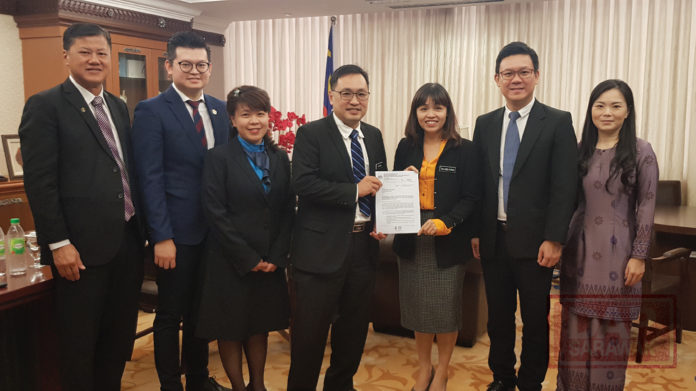 The Ministry of Education has formally approved the moving of SJKC Kai Nang from Sibu to Kuching upon the application of the existing Board of Management of the SJKC Kai Nang.

Deputy Minister for Domestic Trade and Consumer Affair and Member of Parliament for Stampin, Chong Chieng Jen received the approval letter from Deputy Minister of Education Teo Nie Ching approving the moving of the school from its present address Sibu to Kuching.

At its current site in Sibu, SJKC Kai Nang is facing huge problem in its recruitment of students because there are two Chinese primary schools nearby.

Sometime in 2017, a developer in Kuching proposed to donate a piece of land of approximate 10 acres from his development project somewhere in Riveria, Kota Samarahan for the relocation of SJKC Kai Nang from Sibu to Kuching.

In April, 2019, the Board of Management approached Chong to help with following up with the Ministry of Education on the matter. Within half a year, the application for relocation was finally approved.

The second good news for this relocation exercise is that the Ministry of Education has also in principle approved an initial allocation of RM2,000,000 for the building of the new school. The sum is now pending disbursement by the Ministry of Finance.