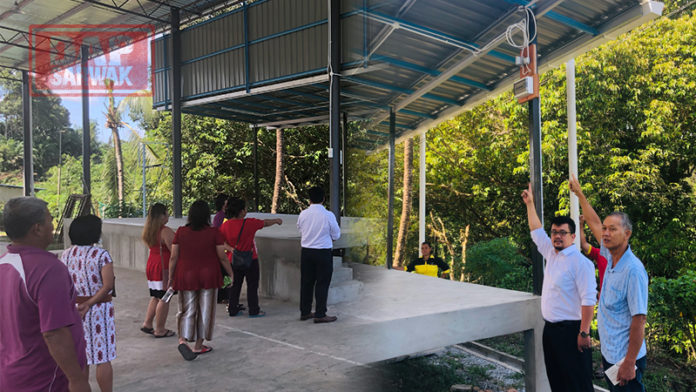 After briefing from the Headmistress of the Chung Hua school, they toured the school compound for some inspection at the request of the PIBG Chairlady Mdm Mary Ak James.

“We were inspecting the new open hall and were shocked to see the wiring of the halls which were exposed to the rain and hot sun. According to the headmistress, the project was deemed complete by the contractor and they refused to build a wall to cover the stage & especially the exposed fuse boxes”, said Leon.

“How can the contractor be so irresponsible in making this electrical device so exposed. This is clearly very dangerous to the children and teachers using the hall especially during a rainy day. MDSA being the project administrator agency must make safety paramount, this electrical sockets must be covered”, Leon added.

We from DAP pointing this out are not against the State Government in giving out a lot of contract works to contractors. We just fear that, in the wake of the enormous amounts of projects given to the people, some unscrupulous contractors might take advantage of the situation and deliver the projects not adhering to the specifications due to shortage of officers to monitor these projects. And there will either be an element of corruption or abuse of power involved.

Therefore MDSA please buckle up & get your work in order, as we do not want the children to be exposed to these dangerous wires and cables.