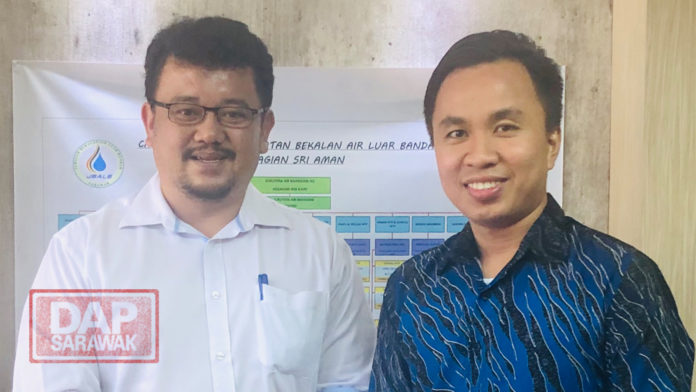 The topic of the discussion was; on what would be next step for JBALB Sri Aman in the event this disaster happens again.

Mr Adzahari explained that there is now a contingency plan ready in the event of another drought disaster such as the one currently faced by the people of Sri Aman.

The water supply disruption recently was also compounded by the emergency resquest by Bomba which needed the crucial water supplies, to put out the forest fires ravaging Jalan Kejatau/Skirau areas & near Taman Harmoni.

‘Mr Adzahari assured me that they are trying the best they can and his staff including himself are on standby round the clock on any possible disruptions. I have informed him on the disruptions of supply at Taman Kim San, RTM Road & Jalan Brayun areas which he promised to look into’, added Leon.

After the discussion, Leon Jimat Donald left to inspect the water containers stations at JKR & Kedang where the public are still getting water from. Some areas are still without water it seems.

Leon reiterated that ‘ it is easy to lay the blame the Sri Aman water issue on the staff of the Sri Aman water board but I do believe the blame should be focused on the elected representatives in the area of Sri Aman Division, for not highlighting & planning ahead 10 years before, on the need for the expansion of this precious resource to the people.’

‘The State Government under GPSBN has failed to identify the Rakyat’s need. How is it possible that there was no in-depth planning on the needs of the people.’

‘Why didn’t the State Government anticipate this drought being the worse since the El-Nino phenomenon happens every 10 year cycle which happens be around this year? ‘

‘As it seems now, only a PH led State Government, that has a great working relationship with the Federal Government, is only able to come up together developing a Master Plan which is able to develop our Sri Aman Division’, added Leon.