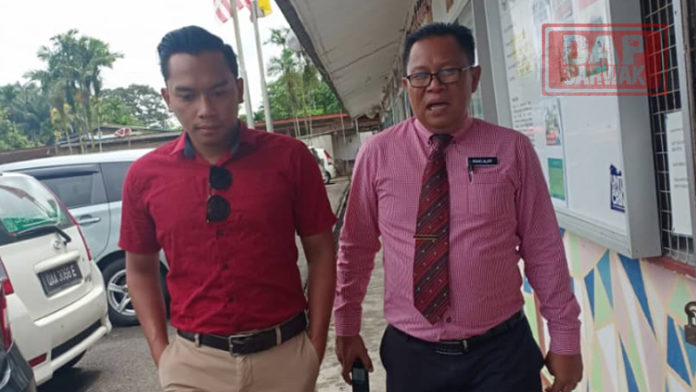 With Aziz at the ceremony were Sim Kiat Liang and Brandon Lee Pak Fook, who are Special Assistant and Personal Assistant to YB Chong Chieng Jen, respectively.

SK Jalan Haji Baki was built 50 years ago in 1969. When Aziz contested in Batu Kitang state constituency in the last Sarawak state election 2016, he recalled that on 12th March 2016, the then Prime Minister had announced and promised to build a new school for SK Jalan Haji Baki.

Instead, the then Barisan Nasional (BN) federal government approved a new building using industrialized-buiding system (IBS) technology with the project awarded to a contractor from Peninsular Malaysia. The cost of the project to build the new IBS building is estimated to be around RM2.93 million which includes 7 classrooms, one laboratory, a storeroom and toilet.

How on earth did the then BN federal government awarded the project to a contractor from Peninsular Malaysia and at the same time, the then dissolved Sarawak BN state government were talking about Sarawak rights? This is the highest level of hypocrisy.

Now, the new completed building which was built using IBS has several defects including leaks on the ceiling and cracks on its walls. Although the project had been audited by the National Audit Department, it has yet to receive occupation permit (OP) by the Planning and Development Division (Building Section) under Padawan Municipal Council (PMC).

In safeguarding the wellbeing of the students and teachers, qualified persons (QPs) in the building industry (the main contractor) must make sure that the new building has obtained OP from the local authority. OP is required to allow the new school building to be used by the students as it is a permit to certify and to ensure the use of the completed building is safe for occupancy.

In 2015, the PMC had amended its policy on the issuance of OP which no longer require the endorsement by all of its councillors. Instead, the OP would be signed and endorsed by the council’s secretary to shorten the application process. If the new IBS building for SK Jalan Haji Baki has yet to receive OP, why has none of PMC councillors raised this issue?

Before the then BN federal government awarded the project, did they carried out due diligence on the contractor’s background? Was the project awarded via open tender or direct negotiation? Why did PMC remain silent?