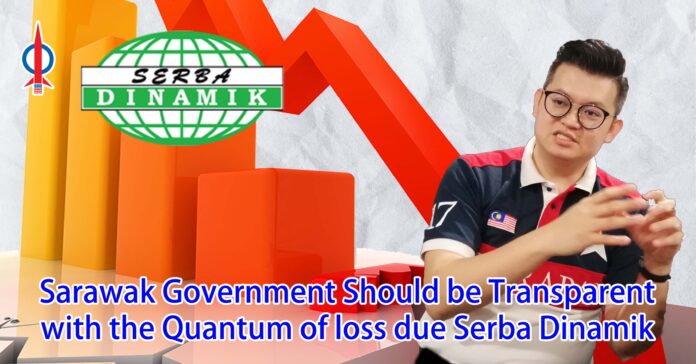 The Sarawak Government should reveal to the public the total quantum of losses suffered by the Sarawak Treasury and all the respective Sarawak government-linked bodies and corporations due to the fiasco involving Serba Dinamik Holdings Berhad, as well as specific plans if any to better protect the interests of Sarawak and to recoup the enormous losses in public funds.

This is in view of the controversies involving Serba Dinamik which the Sarawak Government owns significant shares and would have suffered significant loss due to the plunging of shares prices of the company.

Based on Serba Dinamiks on Integrated Report 2021, the State Financial Secretary Sarawak is the second biggest shareholder and has 159.5 million shareholdings and 36 million warrant holdings while state-linked body, Bintulu Development Authority is the 12th biggest shareholder with  21 million shareholdings and 6 million warrant holdings in the said Serba Dinamik Holdings Berhad.

The deep plunge in Serba Dinamik shares started way back in May 2021 when the issue of the removal of KPMG as the auditor triggered a sell-off, followed by months of high-profile legal tussles with KPMG, EY and Bursa Malaysia, as well as missing the coupon payment of a US$300 million (about RM1.32 billion) sukuk in November 2021.

In May 2021, Serba Dinamik shares were in the RM1.60 range, and right before the executives were charged in December 2021, the shares already sunk to a mere 35 sen. Shares in the company has pluged more than 65.7% and hover around 12 sen today.

That is why since this issue is of big public interest and involves a significant amount of public money, the Sarawak Government must reveal in the spirit of transparency 3 main things;

(2) Was there any pro-active measure done by the Sarawak Government right at the beginning to protect the interest of Sarawak since the breakout of this scandal as early as May 2021?

(3) What are the plans of the government to recoup the enormous losses in public fund?

This is a very serious issue and will have long-term implications. The charges against the executives are serious — ranging from providing false statements and sales figures to Bursa, with a maximum jail time of 10 years if convicted.

When a public company provides false statements and sales figures, it could mislead thousands of investors on the financial health of the company and result in huge investment losses.

However on May 13 this year, the Federal Attorney General issued a statement that all criminal charges were dropped and instead their executives were compounded RM 3 million each under Section 369(a) (B) of the Capital Markets and Services Act 2007.

This send a very wrong message and may impact investors confidence. Once foreign entities notice that such conduct is not dealt with seriously by the Malaysian authorities, they would lose confidence in listing themselves on the Malaysian market.