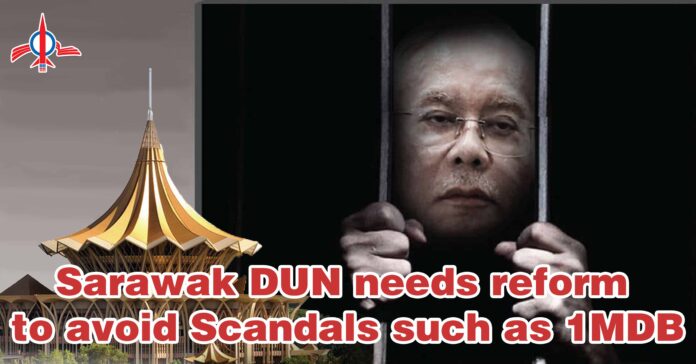 With the final conviction and imprisonment of Najib Razak has send a message regardless of what position of power you may hold, if you betray the interest and steal from the people, they can fight back and pull you down to ensure you face justice. This shows how the ultimate power is “people power” and that each votes matter to ensure our leaders are kept in check and remain accountable for their deeds.

For me, as a Sarawakian, this should serve as a strong lesson to us that strong and independent institutions within our region is also important to ensure such scandals of magnitude do not affect our beloved homeland regardless of who is in power.

1MDB could have been set up with the noblest and best of intent, but due to lack of check & balance and accountability, it was abused and used as a personal ATM by those in power then to dish out “candies” and cash to keep certain groups of people happy, but at the expense and burden to our country and its future.

So as a Sarawakian, to ensure such things do not happen or even to reveal if it is happening already, it is pertinent for “necessary” reforms to be put in place especially in the highest legislative branch or the Sarawak Legislative Assembly (DUN). Necessary reforms must be placed in DUN to mitigate any risk of abuse and more importantly, instil greater public confidence in the administration itself.

This is to promote greater transparency, accountability and check and balance for the good of the people in Sarawak, especially since the Gabungan Parti Sarawak (GPS) controls a super majority and a lot of powers are concentrated in the hands of the Chief Minister under his  cabinet.

While we respect the choice of voters is last election, we cannot allow the GPS government to have absolute or unfettered control over important matters of the state, especially when it comes to finances and state resources without a robust check and balance system especially in DUN.

Just like 1MDB, many of Sarawak’s GLC and agencies are not really accountable to DUN. We need more check and balance and accountability in the running of GLCs and government-linked agencies in our region. All state government-linked companies (GLCs) including the Development Bank of Sarawak (DBOS) and Petroleum Sarawak Berhad (Petros), which have at their disposal billions of ringgit, to report directly to DUN to ensure there is accountability and proper checks and balances.

Even the planned sovereign fund which may have noble intentions to benefit our people, but if there is little oversight it could again be abused and end like 1MDB which was initially set up as a sovereign fund as well.

On top of that, the Sarawak Public Accounts Committee (PAC) must be chaired by an opposition representative so that the person can scrutinise any financial irregularities including state GLCs without any fear or favour. Such reform in Parliament has bear fruits with the PAC releasing multiple reports of financial irregularities including the recent RM 6 billion littoral combat ship (LCS) scandal.

We should also establish more select committees in DUN and be given enough resources and manpower to shadow each of the ministries in Sarawak and operate as entities to check and balance respective ministries. These committees should be chaired by both the government and opposition elected representatives to allow better transparency and accountability and fully utilise all elected representatives to be involved in policy discussions.

If we aspire to be a mature and world-class democracy, the Sarawak government should lead and introduce such reforms in Sarawak. A strong DUN can help avoid such scandals from affecting our beloved homeland and even reveal any scandals that may be happening and bring those involved to justice.

Sarawak’s future and the future of its people is closely tied to how it is governed. Good governance and stronger check and balance will ensure the voice of Sarawakians continue to be upheld and, for that to happen, its supreme legislative branch must be reformed to ensure greater transparency and accountabilit.