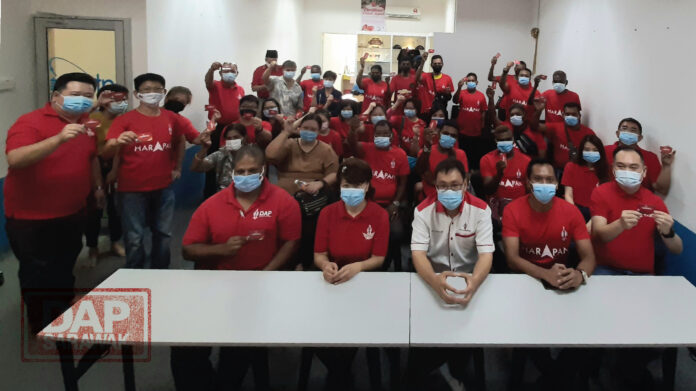 There are 2 political phenomena implicit in the recently concluded Sabah State Elections. The first is that DAP is still the trusted and preferred choice of the urban voters. The second is the new norms in Malaysian politics, the “king-maker element”.

DAP contested in 7 seats and won 6. Our candidates in the urban areas successfully defended their seats with convincing huge majorities and in 3 of the seats, namely, Likas, Luyang and Kapayan, the opposing BN/PN candidates even lost their deposits. The victory has proven once again, the trust and confidence of the urban voters in DAP.

After the “Sheraton Move”, party-hopping and betrayal have become a new norm in Malaysian politics. But DAP stands out as a party with integrity, honour and discipline. None of the 42 DAP Members of Parliament defected or betrayed the party. This is what the general public appreciates and has confidence to continue support the DAP.

The second phenomenon is that, to be the King-maker to determine who forms the government, one needs not win 50% of the seats. In Sabah’s 2020 elections, with BN and PN having jointly won 31 seats and Warisan Plus winning 32 seats, the Parti Bersatu Sabah (PBS), having won 7 seats, has become the king maker, the party who determines who shall form the Sabah state government.

This is the new norm in Malaysian politics. Due to the fact that there are many different blocks of power, it is now more and more difficult for any single party or single coalition to form the government after elections. There are likely to be negotiations and compromises made between opposing blocks before a government can be formed an election. It happened in federal politics, now in Sabah and will likely to happen also in Sarawak after the Sarawak
State Elections.

In the coming Sarawak State Elections, there will likely to be 3 main blocks of power, namely GPS, PH and PSB. It may happen that no single one of the 3 will be able to form the state government alone. Even amongst the GPS or the PBB within GPS, there are competing factions which may break like their counterparts in West Malaysia, the BN and UMNO.

In order that DAP and PH be in the driver seat or in a position to negotiate with the other parties should such a scenario happens, DAP must win a substantial number of seats in the coming State Elections. That will be the time when we can dictate terms and conditions for better policies for the State and for the implementation of our ideals for the betterment of the people of Sarawak.

I believe, in the current political situation, DAP Sarawak only needs to win 15 – 20 DUN seats and we can play the determining “king-maker” role, by bringing an end to the 57-year rule of the BN/GPS hegemony. To win 15 – 20 DUN seats in the coming State Elections is definitely not a “mission impossible”, if we work hard for it.

Last but not least, I express my gratitude and appreciation to the new members who not only continue to support DAP but willing to join the party’s struggle despite us having lost our federal government early this year. This is the time of need for DAP and their participation is definitely an injection of strength and hope to the party and the party’s struggle for the course.