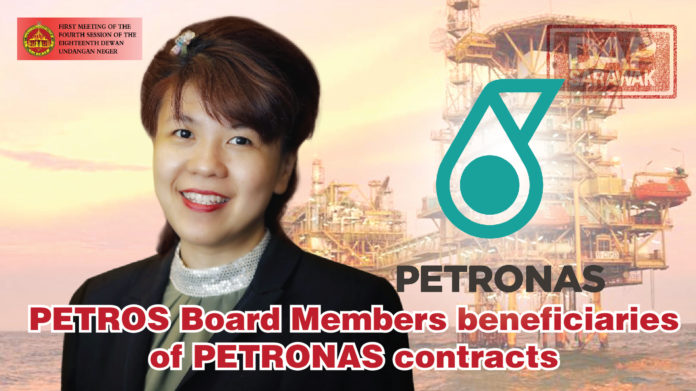 As we are well aware of, the purpose of setting up PETROS is to regulate oil and gas companies including PETRONAS who is operating in Sarawak waters.  But what surprises me is that the YAB Chief Minister appoints people who either have shares or hold big positions in companies that are dependent on PETRONAS for projects and contracts to sit in PETROS as Board Members.  How can these people be relied on to fight for Sarawakians’ rights when the so called fighters we employed and relied on are recipients of contracts from PETRONAS?

For example, Hamid Bugo who has been specially selected for the job as Chairman of PETROS is also a Director of Sapura Energy Bhd.

Sapura Energy Bhd has through one of its subsidiaries companies Sapura Offshore Sdn Bhd bagged major contracts in relation to the Pan Malaysia Transportation and Installation of Offshore Facilities for PETRONAS Carigali Sdn Bhd and Sarawak Shell Bhd.

In addition, as stated in the press release by Sapura Energy Berhad dated 27th June 2019, another subsidiary company by the name of Sapura Fabrication Sdn Bhd was awarded a six-year contract by PETRONAS for the provision of Engineering, Procurement and Construction (EPC) of fixed offshore structure works.  Within the same press release, the company i.e. Sapura Fabrication Sdn. Bhd. also won another contract for West Lutong Drilling Programme from PETRONAS Carigali Sdn Bhd.

So while Hamid Bugo the Chairman of PETROS gets a lot of contracts from PETRONAS via other companies he has interest in, another Board member by the name of Mohd Medan bin Abdullah who is also a director for Bintulu Port is also in similar position.  Mr Medan being a board member of PETROS is also the director of Handal Energy Bhd.

The company Handal Energy Bhd has reported second straight year losses on 31st Dec 2017. However, things started to prosper for this company.  On 1st March 2018, PETRONAS Carigali Sdn.  Bhd.  awarded Handal Energy Bhd’s subsidiary company an umbrella contract for Provision Drilling of Hydraulic Workover Unit for duration of three (3) years with the condition that the company obtain and maintain a valid licence with PETRONAS.

So, who is this well-connected Borneo Seaoffshore group?  A check revealed that the chief Minister’s son Abang Abdillah Izzarim bin Abdul Rahman Zohari is associated with the company. The information was plastered on one of CM’s son’s company website.    I quote “ Abang Abdillah Izzarim bin Datuk Patinggi Abang Haji Abdul Rahman Zohari, aged 40 is a qualified professional commercial pilot before venturing his way into ICT.  Izzarim first foray into business was with Aerotrain Charter, a company responsible for aviation cargo.  He was appointed as Executive Director of Borneo SeaOffshore, in Oil and Gas sector due to his innovative and creative approach to Business.” Unquote.

Besides being linked to CM’s son, Handal Resources Bhd is also linked to Jacqueline Fong Yean Yee.    She is the daughter of our State Legal Counsel, J.C.Fong whom Sarawakians rely on to rival PETRONAS.

On 23 June 2018, thanks to legal counsel JC Fong, PETRONAS application for leave to commence proceedings against the Sarawak State Government was struck out by the Federal Court.  As a result, PETRONAS would be required to comply with the Sarawak Oil Mining Ordinance 1958 and must have the requisite licenses by 1st July 2018 failing which the upstream activities carried out by PETRONAS would be illegal.  (The Star, 23rd June 2018).  Coincidentally, on 30th July 2018, J.C Fong’s daughter aged 43 who is very wealthy despite her young age owns 1.42 million shares of the listed company, Handal Energy Berhad, and was appointed as Director.

So, on one hand, the father act as legal counsel and on the other hand, the daughter was made a director one month after J.C Fong’s hardwork and contribution to PETRONAS case.

I am not sure what the Chief Minister expects from his PETROS board members and legal counsel.  Does he expect them to continue to help Sarawak to fight against PETRONAS while these people already have so much vested interested and are dependent on PETRONAS for projects and contracts?

No wonder there is so much thunder but no rain from the Chief Minister’s negotiation with PETRONAS until today.  The deadline of 31st October for PETRONAS to pay up the 5% sales tax is over.  Sarawakians are so disappointed, myself included.

The Chief Minister is now saying he has submitted a new formula on revenue sharing with PETRONAS.  I wonder what the new revenue sharing formula with PETRONAS is.  Will the new formula benefit normal Sarawakians?  Or will the new formula only benefit companies related to the well-connected Borneoseaoffshore group that is linked to the son of our YAB CM, board members of PETROS and/or relative of PETROS’s board members?  Or will it include the usual Petra Energy group that is helmed by Bustari family and Dayang Enterprise group that is related to Datuk Hasmi and gang who so far have bagged substantial share of PETRONAS’s contracts.