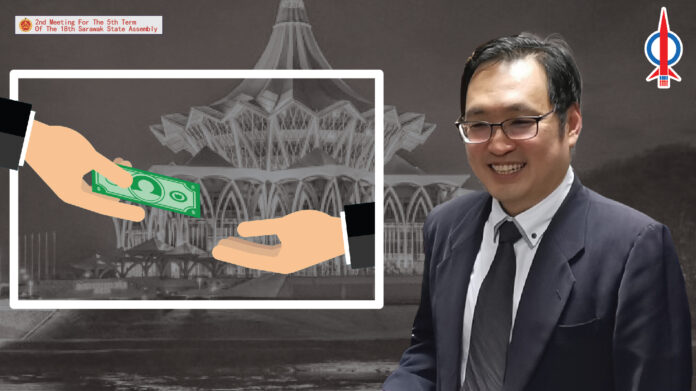 It is incomprehensible that at this time of economic recession, the State Government of Sarawak is still tabling a surplus budget. There is no point for the Government to keep stacking up money in reserves while the people are poor and suffer economically.

This is definitely not the time for a Surplus Budget. The State Government has got its priority all wrong to maintain a surplus budget when the economy is facing a recession.

The national economy has suffered a 17.1% contraction in Q2 this year and the forecast for Q3 is also in the negative growth. We are expecting to be officially in recession.

If the State Government still doesn’t appreciate the severity of the economic downturn, the ministers should go around and ask the traders. Eateries and coffeeshops which used to be packed with customers are now having empty chairs and tables everywhere.

All these point to one hard fact, the economy is bad. The worrying thing is that, the worst has yet to come. With the bank repayment moratorium ending by the end of September, there will be a squeeze in the disposable income when people start to repay bank loans. With the past few months of MCOs, EMCOs, CMCOs, RMCOs, most companies have used up their reserves and many are in the brink of closing down. Once these businesses close shop,
retrenchment will follow suit.

Surplus budget is by nature contractionary, not expansionary. Our economy needs injection of government expenditure to stimulate, sustain and revive. A surplus budget is effectively a withdrawal from the system and not helpful to revive economy.

Therefore, I call upon the Government to increase spending to save our economy.

I called upon the Government to allocate RM1 billion to help the SMEs in the State, in the form of wage subsidies and direct grants to help these SMEs to survive the economic recession caused by the Covid-19 pandemic.

There is too little and almost negligible effort in the State Budget 2021 to help the SMEs.

So far, in the State Budget, there is only the following help offered to SMEs in the State, namely

For the Interest subsidy, though a sum of RM80.7 million was mentioned, that figure is divided into 3 years, with RM17.3 million disbursed in 2020, and estimated RM19 million for 2021.

Therefore, for all the claim of the GPS Government in trying to help the SMEs, only an approximate sum of RM54 million was allocated for this purpose this year and a further RM69 million in 2021.

From an estimate expenditure of close to RM10 billion a year of the State Government, only RM54 million this year and RM69 million next year allocated to help the SMEs. That is less than 0.01%. It is pittance, considering that SMEs form the backbones of the State’s economy!

We need to save the SMEs in the State in order to save jobs. The RM1 billion allocation will thus be of great help to our SMEs and their employees.