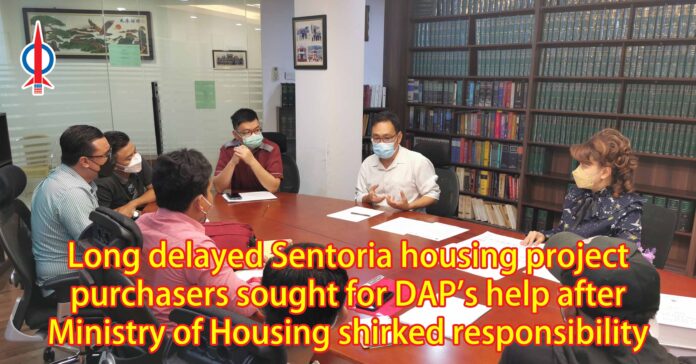 A group of house purchasers of the Sentoria Borneo Samariang Garden housing project (“the said Housing Project”) have sought the help of YB Chong Chieng Jen and YB Violet Yong today over the long delay in the housing development project. The said Housing Project was developed in several phases.

Those who bought the houses under Phases 5 and 7 found that their house were long over the due dates for completion. As a result, the purchasers are compelled to pay their loan instalments while not having the benefit of staying in the houses.

The house purchasers had previously sought the help of the Ministry of Housing but were told to wait for the Developer to complete the project. The Developer has since closed its office in Kuching.

It is to be noted that when the said Housing Project was first launched many years ago, the then Chief Minister of Sarawak, Taib Mahmud was there to officiate the launching. His presence at the event gave many the confidence to buy the houses. Yet, when trouble lurked and the project long delayed, the GPS Government shirk their responsibility to help the purchasers.

It is most unacceptable for the State Government to push the purchasers around and shirk their responsibility as the government of the day. To-date, the Minister for Housing has also not taken any effective step to help these stranded purchasers.

It is our suggestion that given the long delay by the Developer in the completion of the said Housing Project, the State Government should step in to undertake the same. At the very least, the State Government should make sure that the financiers of these purchasers, mainly the Lembaga Pembiayaan Perumahan Sektor Awam and the Borneo Housing Mortgage Finance Berhad (both are Government agencies), stop charging these house purchasers interest on their loans.

As the Government of the day, it is the Government’s responsibility to come forward during such time of distress to help the purchasers. Instead of doing videos on social media for self-publicity, Sim Kui Hian, as the Minister for Housing, should spend more time doing his job under the Ministry of Housing.