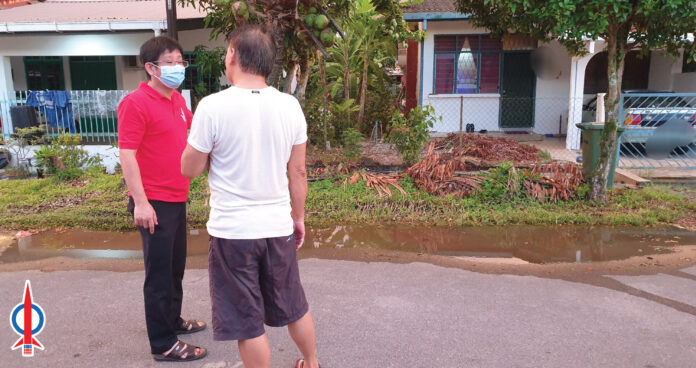 Padawan council and Kuching water board urged to promptly look into the pipe burst issue at Taman Peony in Lorong 6A1D and Lorong 6A2. Low water pressure issues have been a frequent occurrence in the Matang Jaya area due to rapid development that is not on par with water utility upgrades. It is causing great inconveniences to the residents here, especially those staying in double-story houses. The least that Kuching Water Board can do is address the leakage promptly and not wait for months.

In Lorong 6A1D, the residents had exhausted all means to get the Kuching Water Board to address the pipe burst issue. Residents told us, some even went to the Kuching water board and met the personal there months ago but to no avail. We also filed via Talikhidmat weeks ago, and the issue has yet to be addressed.

On the Lorong 6A2, a person claimed sent by the Kuching Water Board came and took a look at the issue, told the resident it was due to leakage after the meter. He offered to repair at the cost of approximately RM700+. The resident rejected the offer, and the case was closed stated as solved on the Talikhidmat system. Such practice is an apparent conflict of interest and does not serve the public well. Two independent contractors were called in before and after the filing of the report to investigate the leakages. Both verified that the major leakage, which now has become ‘a pool of water’ is clearly before the water meter.