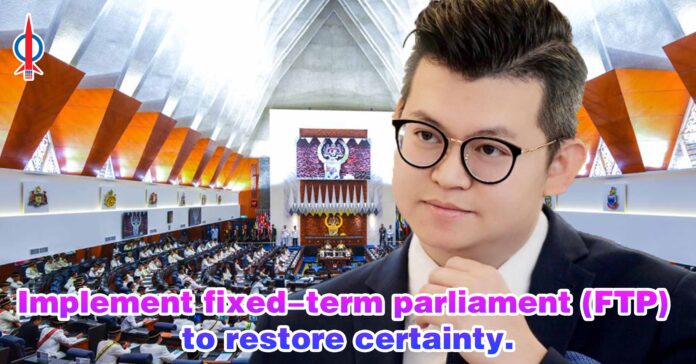 The country should stop this “election guessing game” which not only cause so much uncertainty but also is detrimental to the interest of the country as a whole by implementing a fixed-term parliament (FTP) instead.

Currently, in our country, it seems like the election date and future of our country is held ransom to the internal politics of a single party.

Elections thus are “very political” in the country, with those in power making “political decisions” that might not necessarily be in the best interests of the country. Thus country’s interests will usually play a secondary role.

This is more evident with the recent announcement by Prime Minister that the meeting of the top five leaders of Umno to discuss the 15th General Election (GE15) scheduled on Saturday (Sept 17) has been postponed to a date to be announced later.

This has prolong the biggest question in our country for the past 2 years by almost everyone about the possible dates of the next general election.

Such uncertainty is detrimental to the country. The decisions of millions, from investors and fund managers planning their portfolios to policemen and teachers planning their family holidays hinge on the decision on one man or even party to call the election.

An unpredictable electoral calendar is bad for investors and economic growth.

Even Cabinet Ministers of any government may find it difficult to plan out and carry out their portfolios if they themselves may not know how long they have in their Ministry especially in current uncertainty.

Since election is so uncertain, decisions made such Ministers may be more “political” for their own survival rather than put forth long term reform plans within their Ministry.

That is why it is detrimental for our economy and society concerning assets valued in the billions, when we continue to allow such uncertainty and important decision to be held ransom to a decision by a few.

That is why i believe solution is straightforward, any government should be allowed to served a full-term unless in extra-ordinary circumstances.

FTP should be made a priority and even on a long-term, for it to take the form of a constitutional amendment to guarantee some permanency.

This has been done in our countries, not just in countries with presidential systems, but also done for parliamentary governments, such as Canada, Germany, New Zealand and others

With the country and world at large facing a triple-E crisis of economy, endemicity and environment, we should not allow our “election dates” be used as ransom by any political parties at the expense of our economy and society.