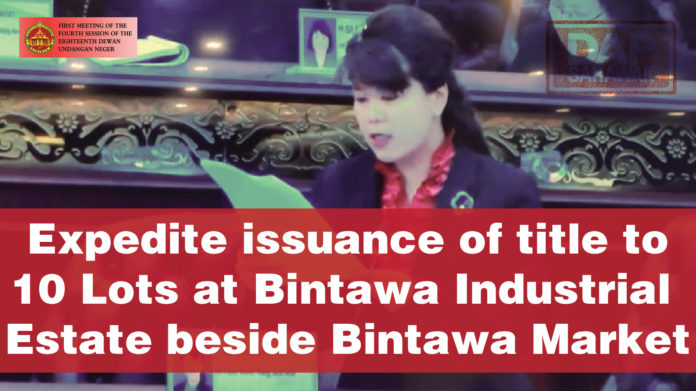 Request for Issuance of Individual Titles

I urge that the Sarawak State Government to immediately issue land titles to some ten lots in Bintawa Industrial Estate along Jalan Perbadanan after asking these group of allottees to quit their previous site at Petanak in the 80s and move to the present lots under Temporary Occupation Licence (TOL). As usual, they were asked to quit the Petanak land to give way for cronies development to build shophouses during then.

Dealing mostly in cottage industry and operators of salted fish for the last 33 years at present sites, the traders were robbed of any opportunity to expand their building or business as they could not get any bank loan with a piece of TOL. The Financial Institutions do not recognize TOL as the land is still considered as state land. They need an individual land title to prove that they are the registered owners to their lands so that they can use it as collateral for their bank loan and thus the present predicament made it hard for them to venture into bigger business.

May I ask why is it that when it comes to alienation of lands that benefit the cronies, the Sarawak GPS State Government can do it in a blink of an eye but when it comes to the people, they always have to wait and suffer for decades? Where is the fairness? It is shameful to note that since moving to the present site, they have seen three Chief Ministers and none has shown compassion to allow them to trade with a peace of mind.

33 years is enough of suffering. In is unacceptable for the State Government to sit on the problem for 33 years and nothing gets done to settle the issue by issuing land title to these 10 allottees. If the State Government can allow these allottees to stay on the lands all these years, it is clear that the state government has no plan at all to develop the area for other purpose. The Sarawak State Government’s action has proven that the lands are meant for these traders only. As such, do issue them the titles and let them know the premiums they have to pay.

I was made to understand that the matter has been sitting at the Minister’s office for a long time and thus, may I request both YAB Chief Minister and Minister of Urban Development and Natural Resources II to attend to it immediately instead of keeping these groups of traders in limbo if you do call yourself an efficient and caring government.