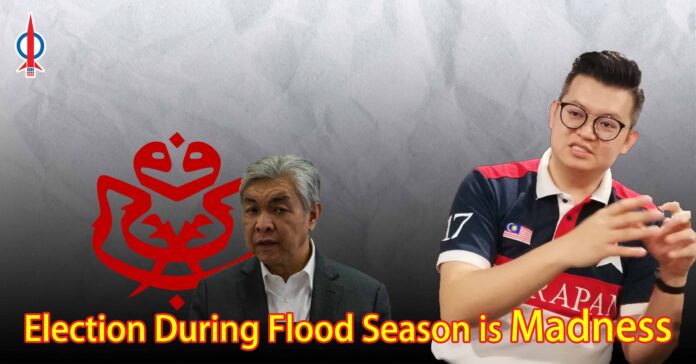 The Malaysian Meteorological Department (MetMalaysia) 2 days ago just released an official statement saying that heavy rain and thunderstorms could be expected from October to November as the country moves through the monsoon transition phase following the end of the southwest monsoon period.

It said the transition phase was expected to begin on Oct 3 and continue until the following month where the country will experience weak winds from all directions, conducive to thunderstorms that usually bring heavy rain and strong winds within a short period of time.

Even with such clear and early warnings by MetMalaysia, politicians from UMNO continues to forsake it for their own self-interest and willing to gamble with people’s lives just because of a bunch of people who are scared of ending up behind bars for their criminal acts.

Haven’t they learn from the devastation caused by the floods last year itself? The floods in December last year alone claimed about 50 lives and massive property damage, many amongst the poor and vulnerable.

Fact of the matter countries around the world including the US, Germany, Pakistan, South Korea, and China experienced severe weather like never before. A third of Pakistan is even under water due to the severe floods killing more than 1,400 people and huge devastation to properties.

Climate scientist have warned that due to effects of climate change, we may see more severe weathers this year onwards. On top of that, with floods we will see a higher risk of increase of diseases such as dengue, or water borne disease like leptospirosis, cholera, typhoid fever and other diseases causing gastroenteritis that comes along with the floods.

However instead of gearing up all necessary preparations and focus to save and protect lives, the government chose to play politics at expense of the people. Their focus will now be on campaigning rather than really focusing on the floods itself.

On top of that, the Election Commission themselves even said that think if the GE15 is going to be held during the monsoon season, it may cost up to RM 1.2 bilion which would be around double what it cost to conduct the 2018 general election in its entirety which was about RM500 million for GE14.

The extra cost needs to be spent on logistics, particularly on transporting voters to their respective polling stations in constituencies that were flooded.

In many cases, the people may not be interested in the election as they will absolutely prioritise their lives over some political event. So this is a clear deliberate act of voter suppression and taking away people’s choice to vote.

That is why i call all parties in government to stop such madness and prioritise the lives of the people now as such decision normally has to go through cabinet as well. If GPS is really the “Kingmaker” that they claim to be, they should block such an attempts and hold elections when it is more suitable.

Last years floods and the warning by MetMalaysia should be used as a lesson, that lives takes priority!

That is why we the people in the upcoming election must stand up and make their vote count regardless of the situation.

Remember these politicians that are gambling with your lives and make sure you punish them not only to send a message, but also to ensure the court cluster continues to face justice.