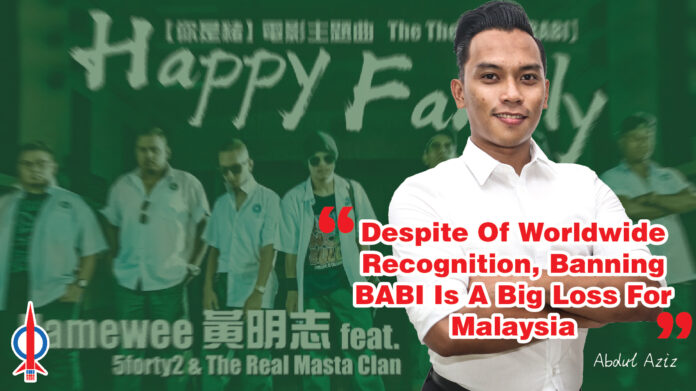 Malaysia’s ambition and ingenuity has once again taken on and beaten the best in the world and I extend my congratulations to Namewee for the achievement he made in his new film entitled ‘Babi’.

According to Namewee in his Facebook posting, ‘Babi’ is a film that centres around a real-life school racial riot that happened in Malaysia in 2000 that was allegedly covered up by the government. What was transpired in the film might have opened the Pandora’s box of our broken education system. However, despite the achievement he made this far, the film has been banned. Although he did not name the country but it is made to understand that he is referring to Malaysia. If it is true that ‘Babi’ has been banned from being screened in Malaysia, then this is detrimental to our country for failure to appreciate our local talents.

Too much interference from the government and politicians on our local filmmakers are the reason why our local film industry hindrances its growth and is unable to improve much for decades as compared to our neighbouring countries like Indonesia, the Philippines, Thailand and even Singapore. The police report lodged by the Perikatan Nasional (“PN”) Youth leaders yesterday regarding the contain words of the poster in ‘Babi’ is one of the examples. Such a publicity stunt is already expected. The poster designed in ‘Babi’ should have been seen as part of a marketing strategy to promote his film. The majority of urban Malaysians thinks that the design of the poster is catchy and creative.

However, Malaysia has never fall short of such controversies. Some shallow minded politicians saw this as an opportunity to stir racial sentiments by making this issue sensitive and provocative. No one sees this as sensitive until PN Youth leaders made it sensitive. If everything is so sensitive, how will our society be able to progress? Unless it benefits them, the word ‘sensitive’ will barely exist. The problem with these shallow minded politicians is that their ability to think through practical reason is very limited and lacks empathy. That is the reason why they can only see things at one angle which is racial sentiment. Without playing the racial sentiment, they will hardly survive.

This should not have been an issue in the first place if it isn’t for this group of shallow minded politicians. I personally feel that these PN Youth leaders have an ulterior motive by making mountains out of a molehill as they are running out of credible issues. If it is true that PN Youth leaders want to show their gallantry and be seen as fighting for the people, they should start by focusing on the most vexing issues such as unemployment, low wages, free education, domestic violence, illegal drug abuse, abortions, school dropouts and education reforms. Therefore, I expect the PN Youth leaders to be more intelligent in order to make their presence felt and to make themselves relevant.

If these PN Youth leaders resort to playing racial sentiment, I doubt they will win a single seat in urban areas. As of now, a total wipe-out is the option that the urban voters will give to them.