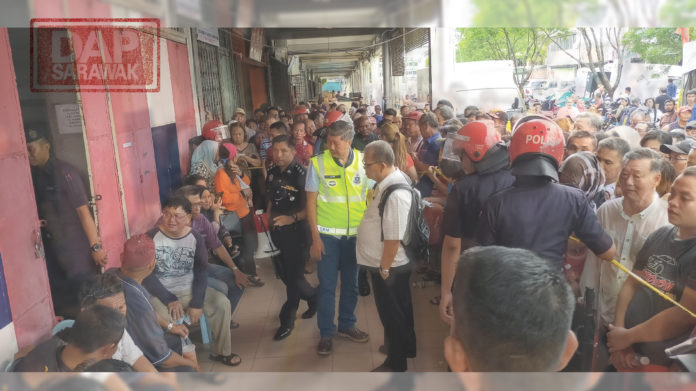 The DAP Kuching regret the untowards incidence that occurred at the DAP Kuching Office today in association with the distribution of TV decoders by MyTV.

In fact, yesterday, we have similar crowd size and everything went smoothly, the people collected their respective number slips, queued up and orderly got their decoders from MyTV. Everything went on smoothly.

Yet, today, there is a sudden turn.

From the report of our members on the ground, there are a few persons among the crowd who started to shout abuses since early morning and instigated the others to ignore all instruction to collect numbers. They even started throwing things to create a chaotic situation. These few persons seemed to be minded to create rowdiness and sabotage the giving out of the decoders. As if that is not enough, there was also a sudden electricity outage which put the whole distribution process to a halt.

We have no choice but to call in the Police and Federal Reserve Unit (FRU) to help in crowd control.

The DAP Kuching has no problem in handling much bigger crowd than today’s crowd size. Nevertheless, there were a few amongst today’s crowd who are adamant to ignore all instructions to be orderly and acted with a single purpose to create havoc and rowdiness to sabotage the distribution process.

We strongly suspect that there is certain quarter who is jealous of the success of the first day of distribution and thus planned this act to sabotage our good intent and effort.

While everything went on smoothly on the first day, then suddenly on the second day we have a few nasty characters instigating the crowd, many not from Kuching and then the sudden power outage, these are just too much of a simple coincidence.

Meanwhile, we would like to express our thanks to the Police and FRU for their swift respond to help in crowd control and contain those few nasty characters.

The digitalization of the TV channel is a project started by the previous government and MyTV was thereby appointed. We, the PH Government, found that to be a good project and thus decided to continue with it.

It was only upon the insistence of the DAP representatives that MyTV finally agreed to distribute the decoders in Sarawak. As such, the DAP Kuching office was used to facilitate the distribution and also to save costs.

However, given the experience, we will stop the use of our office places for distribution in other towns in Sarawak. We will arrange and urge MyTV and MCMC to rent a bigger hall for subsequent distribution of the decoders.

We DAP will continue to press MyTV to do its distribution of the decoders to the people in Sarawak. Though such obligation was not specifically provided for in the contract entered into between MyTV and the previous Government, nonetheless we shall make sure that the people of Sarawak will not be short-changed.