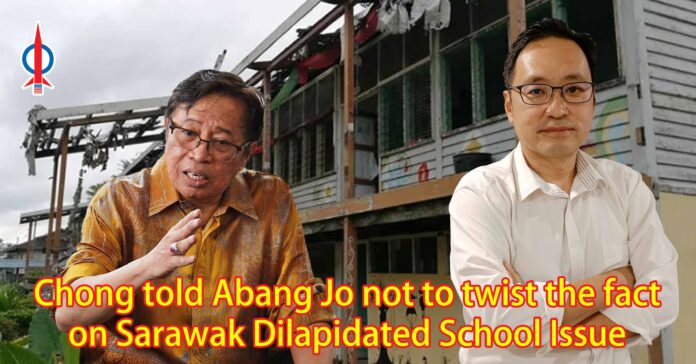 Abang Jo is either suffering from partial amnesia or maliciously twisting the facts when he accused Lim Guan Eng, as the then Minister of Finance in 2019, of demanding the State Government to repay RM1 billion of its loan to the Federal Government before Lim would allocate for the repair of dilapidated schools in Sarawak.

In fact, allocations for the repair of dilapidated schools in Sarawak had been made in the 2019 Budget.

The State Government then owed the Federal Government billions in loan. Under the normal financial process, any repayment of loan by the State Government to the Federal Government would go into the Consolidated Fund from which Fund, allocations to the various states would be made for different projects and programs as stated in the Budget or Supplementary Budget. It never happened in the history of Malaysia that the whole of the loan repayment amount be allocated back to the borrower state.

Therefore, when Lim Guan Eng offered to the State Government that the whole of the repayment of RM1 billion to be allocated back for the State as direct grant for the repair and upgrade of dilapidated schools, it was an extra-ordinary offer giving special preferential treatment to the State.

It is a gesture of goodwill. Any person who understands the workings of Government financing process and procedure would appreciate such preferential treatment.

All the years before, when the State repaid its loans to the Federal Government, the money just
went into the Consolidated Fund and was then allocated as expenditure for all other states.

But then, Lim Guan Eng, went out of his way to make sure that the whole of the repayment amount
goes back to Sarawak so that Sarawak would get an additional extra direct grant of RM1 billion for
repair and upgrade of dilapidated schools in Sarawak. For that, he had a heated argument with
Mahathir who initially objected to such preferential treatment for Sarawak but acceded to Lim’s
request.

It is also to be noted that the more than 1000 dilapidated schools came about after 55 years of Barisan Nasional government’s abuse. It is only in 2018 that the Pakatan Harapan Federal Government started taking serious measures to rectify the problem.

For Abang Jo and the GPS to demand that PH, in 22 months of government, to resolve the problem
created by GPS itself over a long 55 years, that is most unreasonable.

Therefore, as a Premier, Abang Jo should not engage in gutter politics by twisting facts. A person of
the stature of the Premier of the State should not stoop so low to try to win some political points
through such cheap shots and misrepresentation.