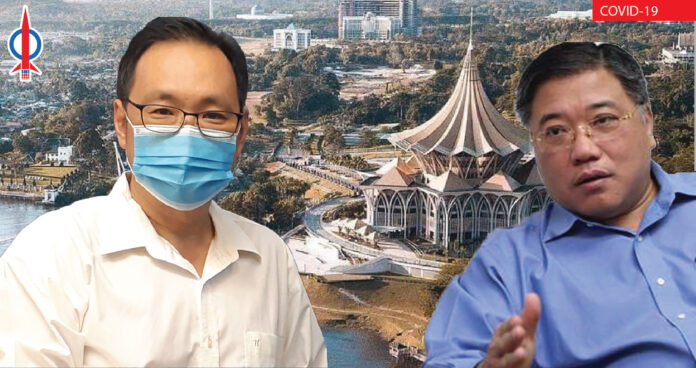 The right person to resign is not the Direct-General of Health Ministry Tan Sir Noor Hisham Abdullah but the Prime Minister and his failed cabinet members tasked with the responsibility of making the national policies on the fight against Covid-19 pandemic.

Tiong Kiing Sing’s statement calling for the resignation of Tan Sri Noor Hisham Abdullah is barking at the wrong tree. If he is true in trying to make the culprit for the prolonged sufferings of the people accountable, he should be calling for the resignation of the Prime Minister. Instead, he and his gang of GPS leaders and Members of Parliament have resolved to continue supporting the failed Perikatan Nasional (PN) government.

It is absurd that when government has failed to contained the spread of the virus, instead of the ministers and the prime minister resigning, the minister who was in charge of the Majlis Keselamatan Negara got a promotion to become the Deputy Prime Minister and all the other ministers responsible for the failure to contain the spread of the virus get to keep their ministerial posts. There is total lack of accountability in the PN Government’s administration.

The PN Government’s failures are evident in that:

Tiong Kiing Sing needs no reminder that Mahiaddin and his PN Government is able to mess the whole country up because of the GPS’s strong and unfailing support. Despite all the mess created after the one year and five months’ rule, all the lives unnecessarily lost to the Covid virus, the terrible disruption to our economy and the total disregards to the sufferings of the people and the trampling over our fundamental rights of Parliamentary democracy, the GPS continues to fully support the PN Government.

I urge Tiong Kiing Sing not to try to cover up for the failure of the PN Government and the wrongs of the GPS in supporting this failed government by making such a ridiculous and unreasonable call for
the resignation of Tan Sri Noor Hisham and wrongly pushing the blame of the PN Government on him. It is the Prime Minister, his ministers and the GPS who are the true culprits of the mess we are in.