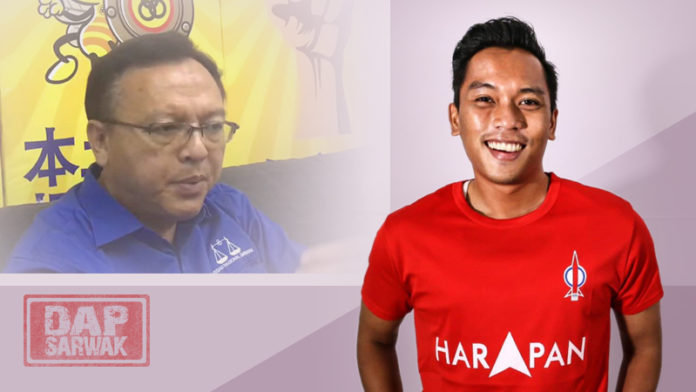 As usual, I am referring to the childish statement recently issued by Padawan Municipal Council (MPP) Chairman Lo Khere Chiang.

I am not going to feel shocked or peeve like how Lo would usually pretend to feel in most of his childish statements. However, I do find it seriously unbecoming and despicable when a seasoned politician like Lo publicly smeared my name by giving false statement of fact. In his childish statement, Lo accused me of asking him on “why he (Lo) did not cancel the proposed project to build new multipurpose hall amounting to RM1 million and the new hawker centre with the amount of RM800,000 for Kpg Haji Baki?”. Does Lo have a reading problem?

If Lo is being egoistic to stand by his words, I demand him to disclose to the public in which part of my official statement did I ask him “why did he not cancel the two proposed projects?” Be a man and don’t try to beat around the bush. Trying to put words into my mouth by creating fake questions with malicious intentions just goes to show how pathetic Lo is in trying to gain cheap publicity for his political mileage and SUPP political survival. Lo keeps making such false statements in order to make himself relevant in Batu Kitang state constituency, but in fact, he is merely trying to portray being a hero only to his supporters and lackeys.

Accusing me maliciously for saying something that I never said just goes to show how unbelievable that Lo would have chosen to stoop so low to that level. As far as I can recall from my official statement dated 04-05-2019, I advised him to allocate some fund through MPP in providing new hawkers centre falls within the local council’s jurisdictions.

My question to Lo was very simple. As a Chairman for MPP, why did he not allocate some fund to build facilities for the said Kpg Haji Baki hawkers centre using the ratepayers’ money which the council collected through annual assessment rates? (Paragraph 3)

Firstly, I asked Lo, if it was Najib who pledged RM1 million for the building of the Kpg Haji Baki new multipurpose hall in 2016, why didn’t the then kelptocratic BN regime fulfill the promise? Secondly, since the promise made in 2016 until the change of the federal government in May 2018, why have Lo never opened his mouth demanding Najib to expedite the two said projects? There was a time gap of 2 years to fulfill the promises.

Again, in my official statement (under Paragraph 5), I stated that as a politician, Lo should know the concept of public administration. Lo should be well-informed that Malaysia is a democratic country which is based on federalism and it has three level of government namely: federal government, state government and local government. In Peninsular Malaysia, the local councils are administered under three legislations namely: Local Government Act 1976 (Act 171), Town and Country Planning Act 1976 (Act 172) and Street, Drainage and Building Act 1974 (Act 133). On the other hand, in Sabah and Sarawak, the local councils are administered under Local Government Ordinance 1961 and Local Authorities Ordinance 1996 (Chapter 20) respectively.

Local government is responsible for: (1) Maintenance of township, roads, street lights and drains, (2) collection and disposal of solid wastes (including sewerage), (3) trimming of trees and grass cutting, (4) landscaping and beautification, (5) licensing of hawkers and businesses, (6) control of building plans and advertisements, (7) vector control, (8) public recreation facilities (fields, swimming pools), (9) public housing (only in some places), (10) pets licensing, (11) public toilets, (12) crematorium, (13) rest houses, (14) car parks, (15) market, and (16) enforcement. Don’t tell me that Lo is not aware of his authority under the local council’s jurisdictions.

From the face of facts as abovementioned, by now, Lo should know how to differentiate the role of these three governing institutions in our country. As a Chairman of MPP, Lo should not expect the federal government to bear the cost to build the hawker centre as it falls under MPP jurisdictions. Instead, he should request for financial assistance from the state government since the council was created by the state government under the Local Authorities Ordinance 1996. His ignorance to the concept of public administration shows that he is merely a “half-baked politician” and he should feel ashamed of himself. As a young man with dignity, I would not stoop to his level.

To digress a little, the issue of whether I am a “half baked lawyer” or a qualified lawyer is irrelevant to the issue that we discussed in the public. It is not something that Lo should be “busybody” about. As his strong opponent for Batu Kitang state constituency, Lo should have known very well of his opponent’s education background. For his information, I do my law degree by myself, using my own pocket money. Lo should stop behaving like he is the “taiko”.