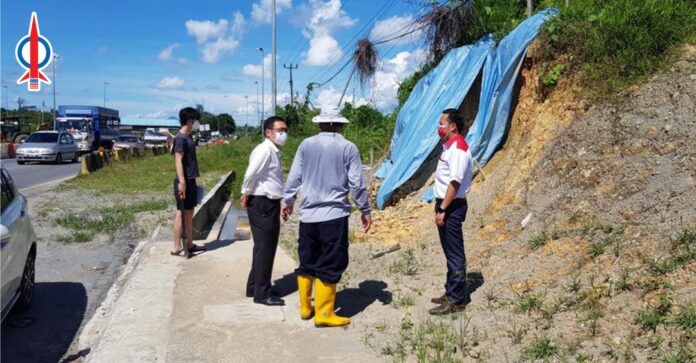 Yesterday, my assistant Michael Kong and I attended to a complaint by a landowner affected by the construction work of the Pan Borneo Highway around 9 1/2 Mile Jalan Penrissen.

The affected land was first lot from the main toad but the access road (cross over) to his land was removed by the contractor to construct the drain along the main road.

Despite numerous complaints by the land owner, more than 2 years after the cross over were removed, the contractor refused to re-construct the cross over.

As a result of such arbitrary act, the landowner have been deprived of the access road to his land for more than 2 years.

Patience has run out and the landowner has no choice but to seek assistance from DAP to hep highlight the issue to the relevant authority.

We do not object to development, but the authority must make sure that the development work should not unduly and unreasonably affect the people. Imagine, a landowner being denied the access to his land and his land laid wasted there for more than 2 years.

The contractor and the authority must be held accountable and responsible for such irresponsible and rash act.

Mayor, why keeping some KMC units vacant when so many poor need a place to stay