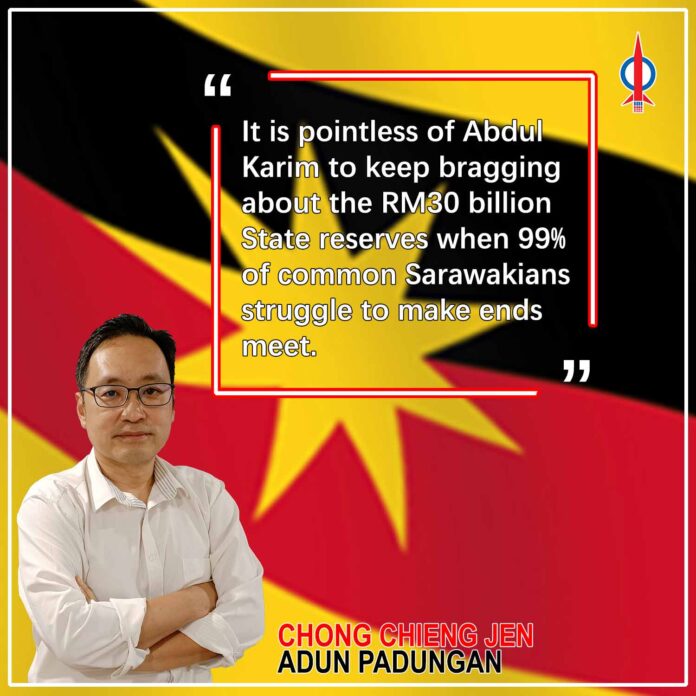 Abdul Karim’s rich RM30 billion State reserves statement reveals that he is totally out of touch with the current plights of the people of Sarawak. Such statement again confirms the hard facts that Sarawak is a “Rich State but Poor People”.

While the 1% Haves like Abdul Karim and his GPS colleagues do not feel the pinch of high inflation rates, 99% of Sarawakians are the Have Nots who are now struggling with the escalating high costs of living and prices of goods.

It is pointless of Abdul Karim to keep bragging about the RM30 billion State reserves when 99% of common Sarawakians struggle to make ends meet.

While Sarawak attracted a total approved Foreign Direct Investment (FDI) of RM23 billion in 2020 and 2021, the Opposition State of Penang managed to attract an approved FDI of RM83 billion for the same period, more than 3 times the FDI figures than Sarawak. This is despite the fact that Penang is an Opposition (Pakatan Harapan) state which was at all time subject to discrimination and oppression by the Federal Government of PN/BN/GPS and has no natural resources whatsoever, even to the extent that Penang has to purchase water from Kedah.

On the other hand, Sarawak is blessed with all the natural resources, oil and gas, coal mines, timber, water, hydroelectric dams, forests, sand and even gold. Had the GPS managed Sarawak better, we should be able to attract 3 times the FDI than Penang, instead under GPS, we could only manage 1/3rd of what Penang has achieved.

Beside the lack of proper incentives to attract FDIs, the GPS Government has also neglected the development of local SMEs, both the manufacturing and service sectors.

All such lacklustre economic planning and management by the GPS has resulted in a lack of high-paying jobs for average Sarawakians, especially the youth who have no choice but to moved to other states in Malaysia and even overseas to seek better jobs.

Instead of bragging about the RM30 billion reserves, I would propose that the GPS government do the following to help the 99% average Sarawakians who are currently struggling:

The main challenge of all ordinary Sarawakians is not Sarawakians versus non-Sarawakians.
To the ordinary Sarawakians, the true challenge is how to ensure that there is Share Prosperity amongst all Sarawakians by closing the gap of the 1% Haves and 99% Have Nots in Sarawak. To resolve this issue, the GPS Government must focus on creating a more robust and conducive investment environment and creating more high-paying jobs, and stop playing the political rhetoric with its political chants.