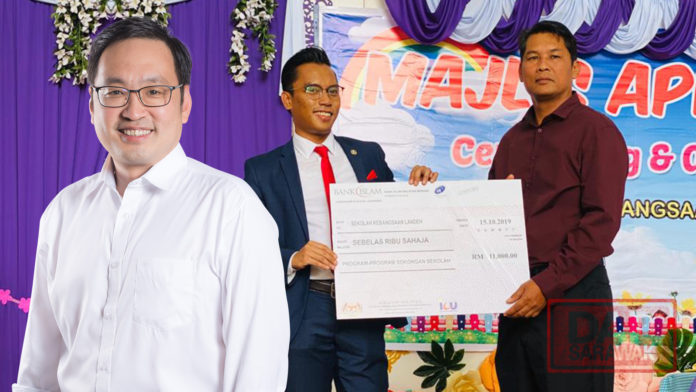 The project which was awarded to Bumiputera contractors through the open tender system took 6 weeks to complete. This proves that the Federal Government under PakatanHarapan practices a competency, accountability and transparent (CAT) policy in giving out projects for benefit of the people.

At the event, Abdul Aziz said that as the population in JalanLandeh is increasing due to the development of new housing areas, he suggested that it is high time for the federal government, the Ministry of Education (MoE) to consider the need to build another primary and a new secondary school to accommodate the increasing number of students along Landeh Road.

He suggested the new primary school to be named SK Sri RPR Taman Sri Permai while the new secondary school would be SMK Landeh. The proposal came as three schools within the vicinity of JalanLandeh and Kota Padawan today such as SK Landeh, SK PayaMebi and SJK Chung Hua Batu 10 are unable to accommodate the increasing number of students annually.

Although SK Landeh is a new school, with the rapid development of new housing areas, it has increased the number of students in SK Landeh. Furthermore, the current number of classrooms is very limited to accommodate the increasing number of students.

In addition, the problem that arises every day is the heavy traffic congestion especially at Kuching-Serian Road during peak hours. As a result, parents have to deal with heavy traffic congestion problems especially when sending and fetching their children. Indirectly, this condition contributes to health factors such as stress and it affects the quality and productivity of their work in the office.

As such, the Stampin Parliamentary Service Centre and DAP BatuKitang Branch will suggest to the SED and the MoE to consider this proposal for the well-being of the people.