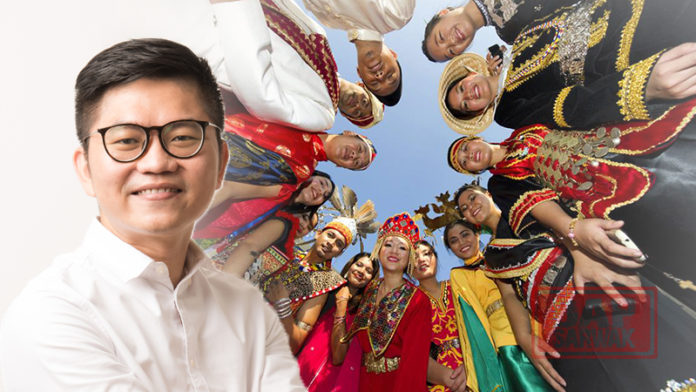 Statement by YB Wong King Wei on Parliament to amendment Bill to Article 1(2) of the Federal Constitution:

It saddens me to see negative comments against Pakatan Harapan (PH), terming the PH government as the one who betrays Sarawak, lacks sincerity or even deceives the people of Sarawak.

Restoring the Status to negotiate on equal footing

PH government has gone one big step but the many do not seem to appreciate it, and this is what saddens me. As a matter of fact, PH government could have remained silent and done nothing like what the previous BN administration did. But the PH government is willing to take the matter seriously and restore the original spirit of MA63. This is not an easy step, for Gabungan Parti Sarawak (GPS) is prepared to claim credit if the job is nicely done. But if the efforts happened to fail, PH will be branded a devil.

The proposed amendment is just a beginning to restore the status of Sabah and Sarawak, and once the status is restored, the Borneo states can come back to the roundtable in the Cabinet Committee for further negotiations on our rights. PH government could have not tabled the amendment Bill because we have already set up the Cabinet Committee to deliberate all MA63 issues. So why the proposed amendment? The significance of such amendment is that the PH government wants Sabah, Sarawak and the Federation of Malaya to regain their status as what it was in 1963, and then engage negotiations. Once your status is restored, you will have leverage to negotiate. This is what the proposed amendment is all about.

When it comes to negotiation, the status of a party matters and once you’re placed on an equal status, you have the advantage over others. It does not work in such a way that you come negotiating with a lower status. When it comes to the ‘MA63 negotiation’, PH government is willing to let the Federation of Malaya, Sabah and Sarawak to negotiate through equal status. This is a significant beginning and will lead to different outcome.

Let’s take a look at the Federal Constitution dated 1963. Back then, the Federation of Malaysia comprised: (a) the 11 states in Peninsular Malaysia; (b) the 2 Borneo states; and (c) Singapore. Even though the Constitution read ‘state’ or in Bahasa Malaysia ‘negeri’, but ‘State’ could mean a territory.

The amendment to Article 1(2) of the Federation Constitution in 1976 merged (a) and (b) into one, making Sabah and Sarawak among the 13 states in Malaysia. The proposed amendment now is to restore the (a) and (b), and this is not 11+2 but altering the 13 to 2.

Therefore, the proposed amendment is set to restore the original spirit of MA63, and it perplexes me that GPS including SUPP and PBB who have been singing about the significance of MA63 were the ones who objected to the amendment Bill and criticised the move.

The Federal Constitution was drafted and agreed upon by our forefathers at the time following the signing of MA63. If restoring the status and rights within the context of MA63 is not what we want, then bring the negotiation to the roundtable and ask for more. The proposed amendment is not the outcome of the rounds of negotiation but to restore the original spirt of MA63. Unless all parties involved come together to renegotiate MA63, there is no way we can directly amend the points which were agreed upon in MA63. To renegotiate MA63, the status of Sabah and Sarawak has to be first restored, which is, to alter from among the 13 states to (a) and (b).

GPS has been asserting on MA63, but why they willingly allowing Sarawak to be one of the 13 states?

Because of this, I cannot comprehend why SUPP and PBB who assert so much on MA63 are not willing to accept the amendment Bill and would rather let Sarawak remain as one of the 13 states in Malaysia. Once this Bill is passed in Parliament, the status of Sabah and Sarawak will be elevated. But UMNO and GPS would rather reject the Bill. Once our status is restored, we will be put in a better position to negotiate at the roundtable.

GPS rejecting, not the content of the Bill, but opportunity to amend the Bill

Moreover, every Bill tabled in Parliament has to go through first, second and third reading. First reading is about introducing the content of the Bill while second reading is to allow members of the House to debate on the Bill and if any further amendment is required, this can be done during the third reading before being passed as an Act. A two-thirds majority is required for a Bill to be passed. As we can see, the PH government does not have the required majority and it looks certain that GPS and other Sabahan MPs are not supporting the Bill, so this proposed amendment is not likely to get through.

I regret that leaders of SUPP even went all out to mislead the people that the proposed amendment was worse than the 1976 amendment. In fact, they should admit it was their fault that the 1976 amendment downgraded Sabah and Sarawak to one of the 13 states, and now we have to clean up the mess that they left behind. However, when we are sincere enough to clean up their mess, they turn our efforts into a political conspiracy.

We have done our best

If the people of Sabah and Sarawak feel that this proposed amendment, which serves to restore the original spirit of MA63 is not a good thing and will be worse than the 1976 amendment, I think just let the Bill does not see the light of the day. Just let Sabah and Sarawak negotiate with their status as one of the 13 states. I seriously think that the PH government has done its part, we have served history well and we believe history will justify us one day.